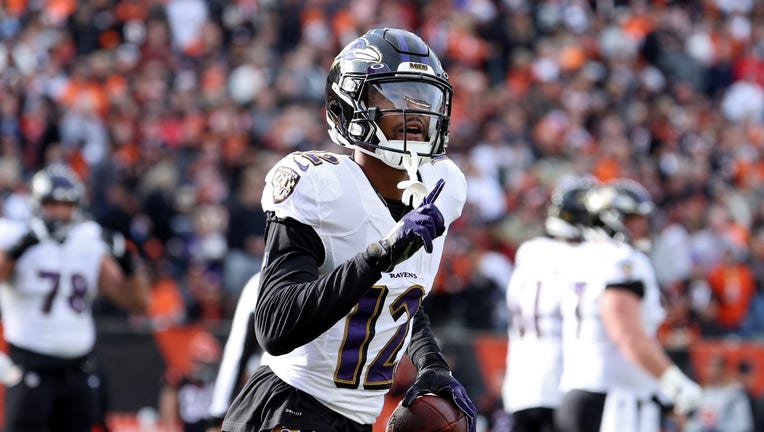 Rashod Bateman #12 of the Baltimore Ravens celebrates a touchdown during the first quarter in the game against the Cincinnati Bengals at Paul Brown Stadium on December 26, 2021 in Cincinnati, Ohio.  ((Photo by Andy Lyons/Getty Images))

Bateman hauled in a 4-yard pass in the end zone from Josh Johnson to end a 12-play, 75-yard drive on the Baltimore Ravens’ first offensive series. Bateman was a first round pick for the Ravens in the 2021 NFL Draft, and had to wait until Week 6 for his first action of the season because of a groin injury.

Bateman finished with four catches for 26 yards. For the season, he has 37 catches for 435 yards in 10 games, and now he has his first career touchdown. The only negative for the Ravens is that it came in a 41-21 loss to the Cincinnati Bengals.

Bateman played in five games for the Gophers in the 2020 season, finishing with 36 catches for 472 yards and two touchdowns before declaring for the NFL Draft. As a sophomore with the Gophers in 2019, he was named the Big Ten Receiver of the Year and a First Team All-Big Ten pick after making 60 catches for 1,219 yards and 11 touchdowns in 13 games.