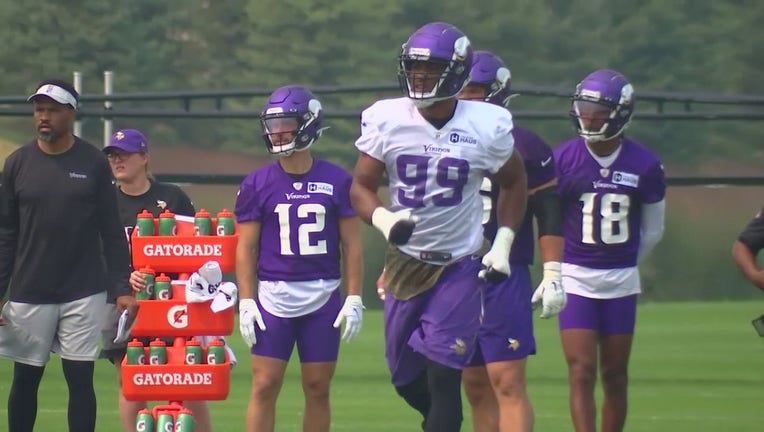 Danielle Hunter is back at training camp with the Minnesota Vikings after missing the 2020 season with a herniated disc in his neck.

MINNEAPOLIS - If what Danielle Hunter had to say before the Saturday night practice at TCO Stadium to end the first week of training camp is any indication, big things are in store for the Minnesota Vikings’ defense in 2021.

Hunter is just one piece of a revamped Vikings defense that, if all goes according to plan and everyone stays healthy, will have a completely different look for Week 1, Sept. 12 at Cincinnati. Hunter participated in a majority of training camp practices, though the wasn't in pads for the final workout on Thursday. So far, he looks like the old Hunter that dominated offensive lines.

Friday was the final day of 2021 training camp for the Minnesota Vikings.

He says he’s not there yet, though at the time it was less than a week into camp.

Before the final practice of camp Thursday, Hunter said "I'm unrestricted" in practices and can do "whatever I want" about 10 months removed from neck surgery.

"After the first practice, I was like there's nothing for me to worry about," Hunter said.

Hunter did not participate in organized team activities, and worked out a new contract for 2021 before mandatory minicamp. He was on site, but didn’t do any on-field work and watched teammates while sporting a jersey and visor. He said it was strictly precautionary.

The Vikings’ 2020 tailspin arguably started during the early part of training camp, when Hunter went down with a "tweak." It resulted in a herniated disc in his neck, and season-ending surgery. Mike Zimmer’s defense was without one of the best defensive ends in the NFL before the season even kicked off. Hunter made history in 2019, becoming the fastest player in the league to at least 50 career sacks in his first five seasons. He sits at 54.5.

When July 28 came and training camp started, Hunter was ready to go. Zimmer likes what he's seen so far.

"He’s looked terrific. It’s nice to have him back out there. I’m glad we have him, wish we had 10 more like him," Zimmer said.

Defensive line coach and Co-defensive coordinator Andre Patterson waited to judge Hunter's status until the team's first day in pads. It took all of one play for Patterson to see what he needed to see.

"You’re a defensive lineman, you’re banging somebody every play. The first day in pads was the day I wanted to see. Was he going to be timid to put his face in there? He was not, he looked like his normal self," Patterson said. "After we had the first team rep, it was a run play and I saw him fit the run like he normally do, it was all done for me."

Hunter is just happy to be back on the field, happy to be part of a team. It was hard for him to sit and watch the Vikings falter last year to a 7-9 season, miss the playoffs and not be able to do anything about it.

"It’s very satisfying, being able to go out there and practice with my teammates. It’s just a blessing to be able to come out here, be around my coaches and my teammates," Hunter said.

Hunter is back, and he has reinforcements. The Vikings have Michael Pierce back at nose tackle after opting out of the 2020 season. They’ve also added Dalvin Tomlinson and Sheldon Richardson returns. The only question remaining is who takes the defensive end spot opposite Hunter, a competition that's likely between Stephen Weatherly and D.J. Wonnum.

The next step for Hunter is if he'll play in the preseason, which starts Saturday against the Denver Broncos. Zimmer said Thursday he'll likely get a few reps. Once Sept. 12 hits, there’s no looking back.

"You can’t really train for being in football shape so that’s pretty much what we’re all doing right now. There’s still a ways to go, that’s with everybody," Hunter said.