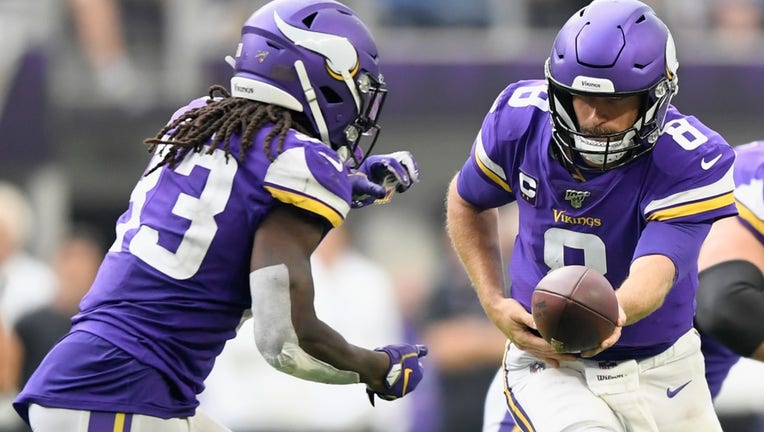 Quarterback Kirk Cousins #8 of the Minnesota Vikings hands the ball to teammate Dalvin Cook #33 during the fourth quarter of the game against the Atlanta Falcons at U.S. Bank Stadium on September 8, 2019 in Minneapolis. The Vikings defeated the Falco

Minneapolis - It's a simple formula for the Minnesota Vikings to win games when it’s efficient, and it doesn’t require Kirk Cousins to be a hero despite his $84 million contract.

Run the football, fly to the football and create turnovers on defense and make a big play on special teams. Oh yeah, and use the schemes created by Kevin Stefanski and Gary Kubiak to make Dalvin Cook the star he has the potential to be.

Cook ran for 111 yards and two touchdowns, the Vikings created four Atlanta turnovers, three by the defense and they dominated the Falcons in a 28-12 season-opening win on Sunday at U.S. Bank Stadium. And Cousins? He was 8-of-10 for 98 yards, one passing touchdown, a rushing touchdown and a 140.8 rating. For the first time in his career, he completed fewer than 10 passes in a game.

It’s nine months removed from when he threw for 4,300 yards and 30 touchdowns last season. Whatever it takes to be 1-0 on Sunday afternoon.

“Throwing it 10 times is really unique. I probably haven’t had a game with that few attempts since literally, Pop Warner. It was what the game called for,” Cousins said. “I have no problem with being conservative as long as we win the football game. That’s all that matters to me. We found a way to get the win, so the approach was a great approach.”

Zimmer has always wanted to Vikings’ offense to have success by starting with an effective run game. It sets everything else up for getting the ball down the field. The only problem? The Vikings were 30th in the NFL in rushing last season.

Sunday, they ran for 174 total yards and averaged 4.5 yards per carry. Last year, they ran for more than 150 yards just twice as a team and had only two individual 100-yard games.

“We gotta continue to do those things because that will only help this team. That’s what Coach Zimmer wants our identity to be, and that’s what we’re going to make it,’ said wide receiver Adam Thielen, who finished with 43 receiving yards and caught the first touchdown of the season.

The Vikings got out to a quick 14-0 lead with Thielen’s touchdown after Eric Wilson blocked an Atlanta punt. Anthony Harris’s first of two interceptions on the day set up Minnesota’s second touchdown.

Cook scored from 19 yards out and showed speed to the edge similar to his 85-yard touchdown run in the preseason.

With their defense mostly controlling the line of scrimmage, it was time to keep running the football and chew up clock.

“I never thought we’d be throwing it 10 times, but the score of the game dictated that. You get midway in the third quarter and the clock is our friend, we really had no reason to throw the football being up 28-0,” Zimmer said. “The faster that clock goes, the better it is.”

Cousins agreed, and said their ability to run the football consistently made it feel like a youth football game. If it’s not broken, don’t fix it.

“That’s what it felt like, and it was working. No reason to change it up,” Cousins said.

It might not have been the most exciting at times, but with a 28-0 lead in the second half, they wanted time off the clock.

“Even though it looked boring at times when we were just running the football, that’s what we had to do to win the game. If it was 14-7, it wouldn’t have looked like that,” Zimmer said.

The question now is if the “ground and pound” approach can work next Sunday at Green Bay. The Packers’ defense limited Chicago to 46 yards on 15 carries Thursday night.

Every week is different and the game plan will change for every opponent. That’s why it’s not likely that 10 passes or fewer per game from Cousins likely won’t be the standard moving forward, and probably shouldn’t be.

Whatever it takes to win.

“Unique game, I’ve never played in a game quite like that,” Cousins said.