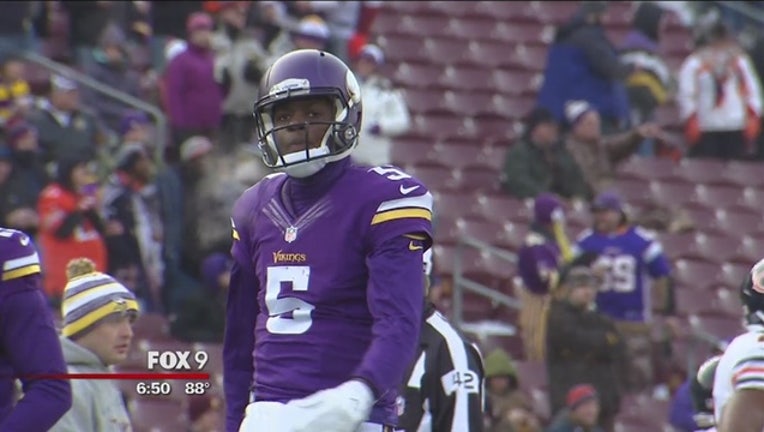 ARLINGTON, Texas (AP) — Tony Romo got his first and likely only extended action of the preseason for the Dallas Cowboys, and found one of his reliable options even with Dez Bryant sitting out again.

On the other side, Minnesota quarterback Teddy Bridgewater completed all seven of his passes and made a connection with his new receiver Mike Wallace as the Vikings won their fourth consecutive game this preseason, 28-14 on Saturday night.

"Teddy was sharp. It was nice to see him get a deep ball to Mike," Vikings coach Mike Zimmer said. "I know everyone wants to see Wallace get a bunch of deep throws, but it's important for us to go through our progressions, go through our reads, and make the correct throw. That's why his completion percentage is 100."

The first of Romo's two touchdown passes was a 60-yard catch-and-run by Terrance Williams, who made his only grab near the 40 coming across the center of the field. Williams had 13 TDs among his 81 catches in his first two NFL seasons.

One of the people who enthusiastically celebrated with Williams on the sideline was Bryant, who hasn't played in any of three preseason games for Dallas since signing his $70 million, five-year contract in mid-July. He has dealt with a strained hamstring throughout camp.

"We just didn't think it was worth him playing eight, 10 plays in this ballgame," said coach Jason Garrett, adding that Bryant did warm up before the game.

After only one catch for 2 yards in the Vikings' first three games, Wallace had three catches for 50 yards in the first quarter. That included a 39-yard grab on a play when Bridgewater had to hurry to beat the play clock and hit Wallace in stride along the right sideline.

The Cowboys led 14-10 after Romo scrambled out of trouble and threw an 8-yard TD to Lucky Whitehead on his final play with 9 minutes left in the first half.

Romo had played in just one series while Dallas lost its first two preseason games, and his only pass had been a completion resulting in a 1-yard loss. He finished 5 of 8 for 88 yards in five series against Minnesota.

"It usually takes about a series to get up to game speed," Romo said.

Observations from the game:

Cordarrelle Patterson had two kickoff returns for touchdowns as a Vikings rookie two years ago, including a longest-possible 109-yarder. He finally had another one in the second quarter Saturday night.

"We've been talking about it every week," Patterson said. "It was time to make something happen."

Patterson took off straight up the center of the field, then went to his right and was in the open after easily getting by kicker Dan Bailey near midfield.

The Vikings wore decals on their helmets with the initials "JG" in honor of Jeramie Gruber, a construction worker who died Wednesday in a fall at the team's new stadium, being built in downtown Minneapolis.

BACK IN THE GAME

Dallas linebacker Sean Lee missed all of last season after tearing a ligament in his left knee in the first offseason workout.

Garrett said Lee was on the field for about 17 plays in his preseason debut and "was around the ball a lot, really looked like his old self."

KNOCKED DOWN, NOT OUT

Vikings punter Jeff Locke was on the ground holding his ankle after a punt in the second quarter, with a flag down near him.

But the penalty was holding against the Vikings and not a roughing the punter call after J.J. Wilcox was blocked into him.

Blair Walsh, who made field goals of 26 and 45 yards but missed a 43-yarder, then punted. Locke later returned to the game.

Cole Beasley returned Walsh's punt 40 yards to the 23. Darren McFadden then weaved through defenders for a 15-yard run before Romo scrambled on his TD pass to Whitehead.

Dallas failed to win a game last preseason, but then went 12-4 in the regular season and winning the NFC East title.

The Vikings won all four of their preseason games last season. But when the games really counted, they were 7-9 and missed the playoffs.

Cowboys rookie defensive end Randy Gregory has a sack in all three preseason games after getting to Bridgewater on third down inside the Cowboys 10 late in the first quarter, forcing Minnesota to settle for Walsh's 28-yard field goal and a 3-0 lead.

The only scores in the second half were TD runs by Dominique Williams (3 yards) and Joe Banyard (7 yards).