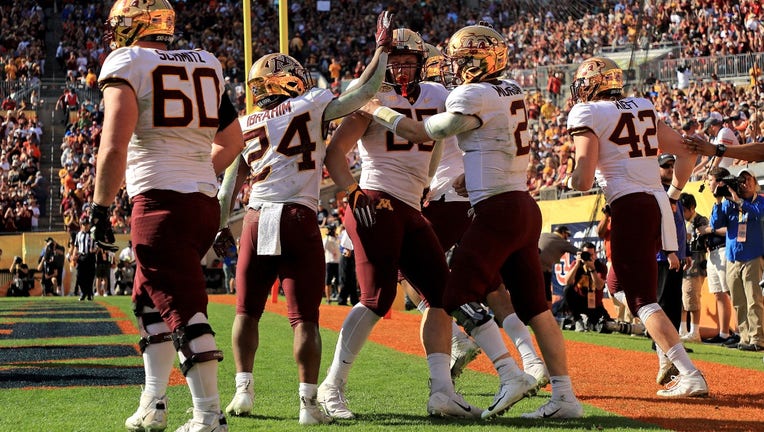 Bryce Witham #85 of the Minnesota Golden Gophers celebrates a touchdown during the 2020 Outback Bowl against the Auburn Tigers at Raymond James Stadium on January 01, 2020 in Tampa, Florida. ((Photo by Mike Ehrmann/Getty Images))

MINNEAPOLIS - It appears there will be Big Ten football this fall after all.

The Big Ten Conference announced Wednesday morning its presidents and chancellors voted to approve a plan to start the football season as early as Oct. 24. The decision comes about a month after league officials voted by an 11-3 margin to postpone the fall sports season due to COVID-19 concerns.

Since that decision, parents of players have protested the decision, sent a signed petition to the league office demanding they reconisder and eight Nebraska football players sued the league, demanding details into how the decision came to be how the vote transpired. It was then learned that Nebraska, Iowa and Ohio State were the three schools to vote against suspending the season.

The conference made the news official in a statement Wednesday morning.

“We appreciate the conference’s dedication to developing the necessary safety procedures for our students and the communities that embrace them.” “Our focus with the Task Force over the last six weeks was to ensure the health and safety of our student-athletes. Our goal has always been to return to competition so all student-athletes can realize their dream of competing in the sports they love,” said Big Ten Commissioner Kevin Warren. “We are incredibly grateful for the collaborative work that our Return to Competition Task Force have accomplished to ensure the health, safety and wellness of student-athletes, coaches and administrators.”

League officials have been made aware of a plan to make daily rapid COVID-19 testing available to student-athletes, the latest development that's causing officials to reconsider their decision. League officials say daily testing will start Sept. 30. If an athlete tests positive, they cannot return to game competition for at least 21 days.

At the University of Minnesota, officials announced on Sept. 1 that out of 1,406 COVID-19 tests since June 1, the Gophers have had a total of 43 positive tests.

Games would be played on campus and will be closed to fans. League officials are working with each Big Ten campus on a plan to have families of players in attendance.

Other start dates previously considered were around Thanksgiving weekend, or early January of 2021.

Schools in the Big Ten are suffering financial shortfalls due to the COVID-19 pandemic. Just last week, Minnesota Athletic Director Mark Coyle announced men’s gymnastics, tennis and indoor and outdoor track will be cut after the 2020-21 season, and eight positions within the department were eliminated as they face up to a $75 million loss in revenue without fall sports. That’s largely predicated on not playing football.

Coyle and the school’s five highest-paid head coaches are also having their 10% pay cut extended through the end of the fiscal year.

There might not be a school who wants a fall football season more than Minnesota. The Gophers, entering P.J. Fleck’s fourth season, are coming off winning 11 games for the first time in 115 years and beating Auburn in the Outback Bowl. They were ranked No. 19 in the Associated Press preseason poll.

"We have a mature football team, and our culture is about responding," Fleck said. "We will be ready to play, and I know our players are excited to be able to compete again."

Coyle, Fleck and President Joan Gabel have insisted from the beginning that all decisions regarding sports are being made with the health and safety of the student-athlete being the top priority. We don’t know if the football season will finish, but it least looks like it could start.

League officials say updates regarding fall sports other than football, as well as winter sports that begin in the fall including men’s and women’s basketball, men’s ice hockey, men’s and women’s swimming and diving, and wrestling, will be announced shortly.