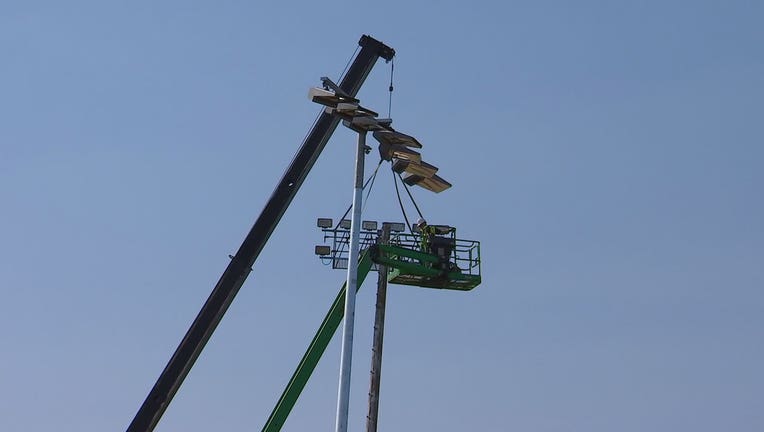 BROOKLYN CENTER, Minn. (FOX 9) - Adam Thielen is used to putting together performances on the field that are lights out, but the Vikings star is now helping to turn them back on at a local high school.

The Thielen Foundation, Choice Bank and other local sponsors are teaming up to put in a new lighting system at Brooklyn Center High School football field in an effort to illuminate the stadium for the first time in years.

The Vikings receiver says Friday night lights were some of his fondest sports memories, so he partnered with some local organizations to make those same memories for Brooklyn Center football players.

"We knew we wanted to have a partnership with these guys," Thielen said. "I’ve played in some big games, NFC Championship game and things like that, but you still look back to those Friday night lights."

"These guys have been without lights for a number of years, so we really thought that this could be impactful," Choice Bank Minnesota Market President John Fritz said.

The original light system went down during a football game in 2018 and have remained off due to safety concerns.

"They said there’s no way you should ever be operating this," Brooklyn Park Athletic Director Nate Gautsch said. "The system was so old and outdated."

They brought down the old system Wednesday to make room for a new era of Centaur athletes.

"We wouldn’t be putting up new poles without their support," Gautsch added. "There’s something about those lights coming on that flips the switch in you as a football player and as an athlete. It’s what high school sports is all about. Having that opportunity."

The lights have the potential to provide an even bigger spark for high schoolers.

"It’s not about sports, it’s about community and about these kids and giving them a purpose and a reason to come out and play sports," Thielen said. "When they do play a sport and they’re excited about it because they have resources and things to help them be great, that also helps them translate to their family life or their school life."