8-year-old Emmitt Bailey advanced to the top 25 for the best mullet in the kid's division of the USA Mullet Championship.

MENOMONIE, Wis. (FOX 9) - With his Minnesota Wild t-shirt, it's easy to see Emmitt Bailey is wild about hockey. But from his luscious locks, it's also clear Emmitt is a fan of hockey hair.

"I think it's cool. I really do. Some of the coolest people in the world, athletes and rock stars, they have mullets, so I mean, it's pretty cool," said Emmitt's father Eric Bailey.

This goalie decided to go with the flow a couple of years ago. "Because I wanted cool hockey hair," said Emmitt.

His new 'do' earned him the nickname Mufasa during wrestling season because coaches and fellow wrestlers said it looked like a lion's mane. But these days, most people know him as "Mullet Boy" because of his growing fame. 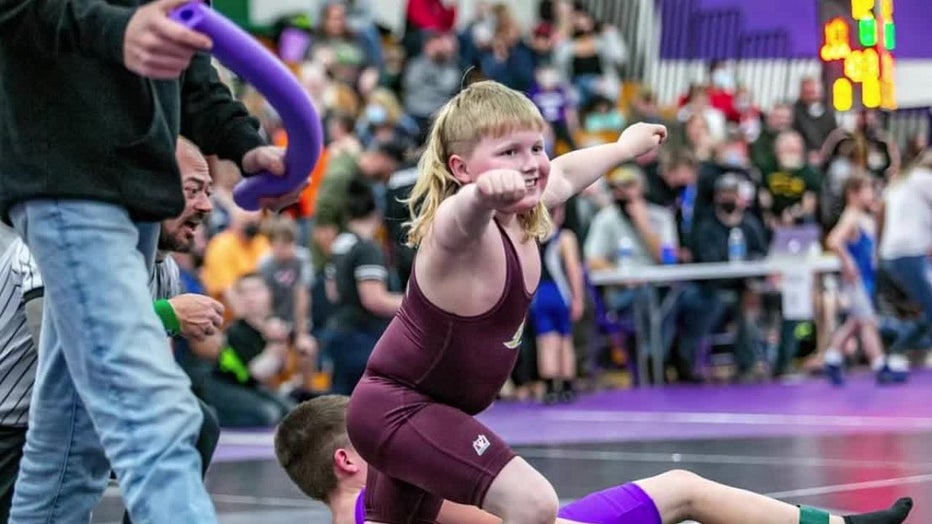 8-year-old Emmit Bailey with his mullet during the wrestling season. Emmit advanced to the top 25 in the kids division of the USA Mullet Championship

"He has gone viral, and I can't wrap my head around it right now. It is nuts. It is worldwide," said Eric.

The 8-year-old from Menomonie, Wisconsin is competing for the best mullet in the kid's division of the USA Mullet Championship. His dad says the online contest started out with about 1500 entries and Emmitt has advanced to the top 25.

"We saw the mullet contest, and we always joked about doing it. Let's grow it out, and we'll try it. We'll try it. It's just taken a life of its own," said Eric.

Since word of Emmitt's fantastic follicles got out, he's been invited to throw out the first pitch at a college baseball game. He also shot a video with Menomonie Police where he was arrested for having too much party in the back.

"The intent from the get-go is to just have fun with it. Really and it has been wild. We are having a lot of fun," said Eric.

The winner of the mullet contest gets $2500, and Emmitt knows what he would do with the winnings.

"Buy a go-cart because I want to start my own racing career," said Emmitt.

Voting continues through Friday, but when it's all said and done, Emmitt believes his mullet will make the cut.

"Everyone keeps asking ‘are you going to cut it off when the contest is over?’ Why would I do that, he says. It's part of his image now," said Eric.