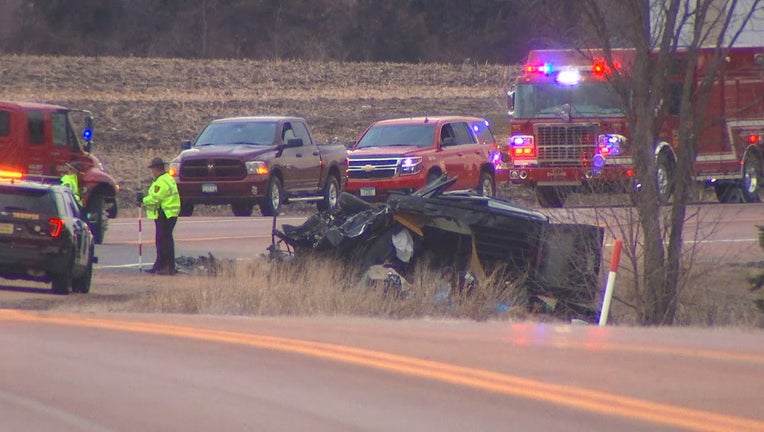 One person was killed in a crash in Laketown Township, Minnesota near Waconia Thursday morning. (FOX 9)

ST. PAUL, Minn. (FOX 9) - Despite traffic volumes decreasing by as much as half on Minnesota roads, the Minnesota State Patrol says fatalities are up due to a huge uptick in speeding.

The State Patrol says more tickets are being written for people driving 100 miles per hour and over as drivers figure that fewer cars means they can drive faster. However, the State Patrol points out that traffic volumes don’t make a difference because it’s speed that kills.

FOX 9's Rob Olson takes a look at why fatal crashes are up in Minnesota despite a sharp decrease in traffic due to COVID-19.

“We have seen people who have said that they’ve been in a hurry to get to where they need to go and they see there’s not a lot of traffic, so they feel like they’re going to go faster,” said Gordon Shank, of the Minnesota State Patrol.

From March 27 to April 13, the first two-and-a-half weeks of the stay-at-home order, the State Patrol wrote 78 citations for drivers going over 100 miles per hour. In the same time last year, only 22 such tickets were issued.

For example, on April 6, troopers in southeastern Minnesota stopped five drivers going between 97 and 108 miles per hour. On April 11, a trooper in Hennepin County stopped three people going over 90 and one at 122 miles per hour.

The State Patrol says speed and inattentiveness could be key factors in these crashes. Also, people feel the open roads mean they don’t need to drive as carefully.

“We’ve had some people ask why we’re still out enforcing traffic laws, this is a perfect example,” Shank said. “We’re still having people dying on the roadways even though traffic volume is down.”