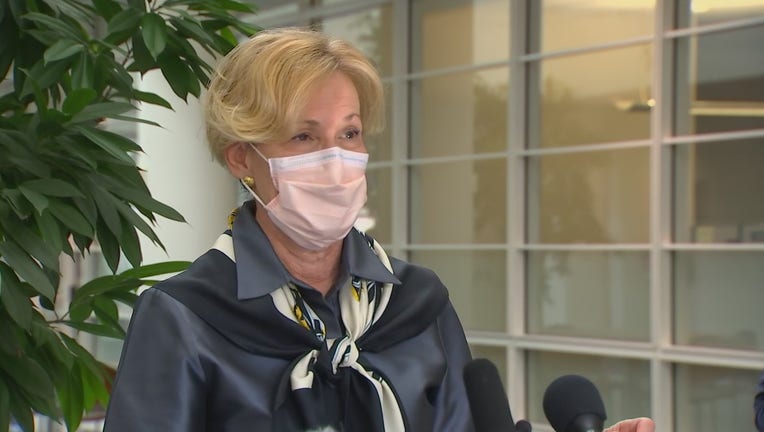 ST. PAUL, Minn. (FOX 9) - One of the nation's most prominent voices in the response to COVID-19 made a stop in Minnesota on Sunday.

One of the nation's most prominent voices in the response to COVID-19 made a stop in Minnesota on Sunday.

Birx, who is on a weeks-long trip to several states to see how COVID-19 is being handled at the ground level, says she has made a point to visit businesses and restaurants across Minnesota.

In the Twin Cities, Birx says she’s been pleased to see the measures implemented to slow COVID-19 spread at restaurants. However, she worries not enough is being done in rural communities.

“Throughout Minnesota, between rural gas stations and urban areas, there is real attention to these efforts in the urban areas, but there needs to be improvement out in the rural areas,” explained Dr. Birx.

Since July, she says they’ve seen a consistent and significant number of infections in the Twin Cities and surrounding counties, a trend she called worrisome.

"This state has gone from two to five to now nine counties over ten percent," explained Birx. "That trend is worrisome this late into the summer.”

Dr. Birx says her team traveled around the state, eating at restaurants and staying at hotels observing mitigation efforts in both urban and rural areas.

"We’ve been really impressed while we were eating out last night your restaurants are following the guidelines," Dr. Birx said. "We don’t see that everywhere and so that’s reassuring but every Minnesotan needs to follow the guidelines."

She said she observed less compliance in Greater Minnesota, stressing the importance of wearing a mask when social distancing isn’t possible and avoiding large gatherings no matter where you live.

"Sometimes in rural communities, because of their experience in March and April, they see this as a big city phenomenon," she explained. "No, this virus has gotten into the rural areas."

With Birx saying the next four to six weeks will be critical in containing this virus.

"We have power against this virus but it requires all of us to exert our power," said Birx.