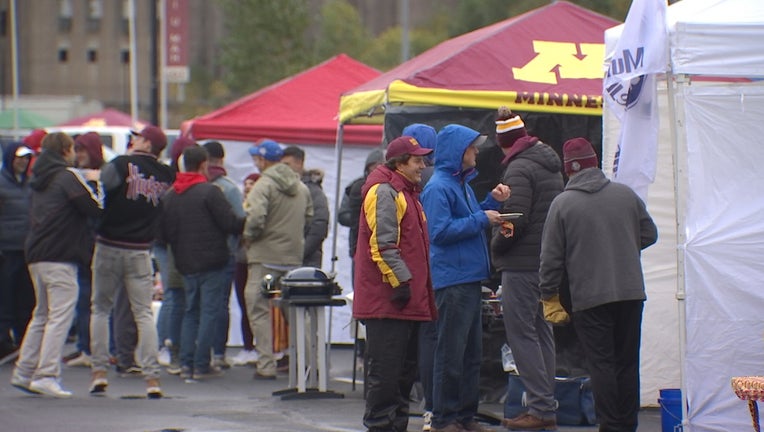 MINNEAPOLIS (FOX 9) - Saturday night, Gopher fans were preparing not only for a game against Nebraska, but also for the big chill as temperatures dipped well below average.

A blustery day brought winter vibes to a fall Gopher tailgate, with the kickoff temperature dropping to 37 degrees.

“It could have been a lot nicer today, it’s the middle of October – it could be gorgeous, it could be 70 degrees,” Losby said.

Instead, fans gathered around the soft glow of heaters, bundled in layers for the coldest October kickoff in a decade.

“It hasn’t stopped anyone from coming out,” fan Nadine Babu said.

For Babu, it just meant adjusting to Mother Nature’s chill.

“The first two tents we set up, we had all the sides on and, literally, they flew over our van that’s behind me, so they broke,” she said.

Neither man nor canine missed a beat, with backup tents in place.

“I think the most important thing is the people that you’re with, so find a great group to tailgate with that you look forward to seeing. Make some good food that you forward to and literally your heart will be so full that you’ll be ok with the weather,” she said.

Meanwhile, others put themselves in the hot seat to avoid the cold.

“The grill’s warm, I get to cook and make everybody happy. It works out pretty good,” tailgater Mitch Schiltz said.

“Honestly, this is Minnesota. This is what you expect; we’re tough, we’re Minnesotans, you know?” Babu said.

Some fans said while they can handle the cold, they’re hoping for the return of usual fall temperatures.

Despite the cold, fans were ecstatic to see the Gophers defeat Nebraska 34-7.