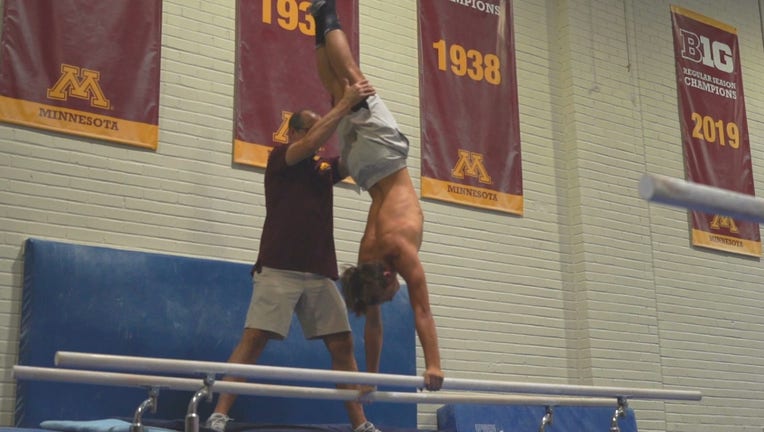 MINNEAPOLIS (FOX 9) - Last September the University of Minnesota eliminated its men’s gymnastics, tennis, and indoor track and field teams. The move was made to save money and balance the number of men and women athletes at the school. But a year later, some of those eliminated athletes are continuing to push to have their teams reinstated.

When the Gophers kicked off the football season at Huntington Bank Stadium on Sept. 2, there were crews outside the stadium, passing out flyers and asking people to support the athletes in their push for a review of the decision to cut the program.

Athletes and supporters are pushing for the University of Minnesota Board of Regents to reconsider cutting certain men's programs, including gymnastics, tennis, and track and field.

Some of Burns’ former gymnasts are continuing on in Dinkytown.

"RecWell has been kind enough to let us stay in here at least through this academic year, what happens after that we’re not sure… so it’s an ongoing fight," Burns said.

The team has reinvented itself as a student organization; they plan to compete as a club program against other schools.

Burns is also behind a last-ditch effort to reverse the Board of Regents’ 7 to 5 vote to cut gymnastics. He points to an improving financial landscape for the university.

"We just feel like it’s worth a conversation," Burns said. "All three sports - tennis, indoor track and field, men’s gymnastics - have raised money."

On Friday the group is hoping a large crowd gathers to support them at the Board of Regents meeting. The devastation of the board’s decision still hurts as much today as it did a year ago.

"It’s obviously been a rough journey this whole time, not really getting a voice, so hopefully this time when we show up and make a demonstration someone will actually listen," former Minnesota Men’s gymnast Garrett Kasiski said.

"Academically, athletically, it’s a pretty successful program here, and that’s what the university is losing by eliminating us," Burns added.

FOX 9 asked the athletic department for an interview with Athletic Director Mark Coyle on Tuesday to talk about these concerns, but that request was declined.