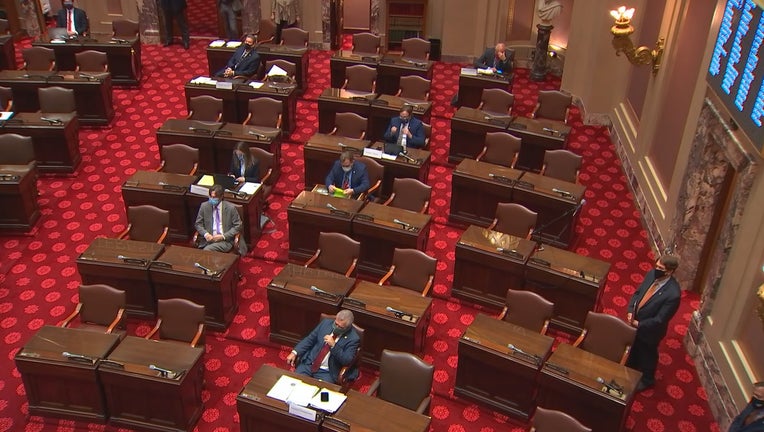 There were plenty of empty seats in the Senate on Thursday. (FOX 9)

(FOX 9) - The Minnesota DFL and Governor Tim Walz are responding after GOP officials reportedly failed to notify DFL members of the Senate that a number of GOP members tested positive for COVID-19.

In a statement on Saturday, the DFL accused GOP members of "concealing" cases of COVID-19 among GOP members before Thursday's special session.

During Thursday's session, 60 percent of senators decided to vote from home -- including Republican Senator Dave Senjem who told FOX 9 he tested positive last weekend. Prior to testing positive, Senjem also said he had attended a leadership meeting the previous Thursday but wasn't experiencing symptoms. He believes he may have contracted the virus earlier than that while campaigning.

A GOP spokesperson said she could not comment on any COVID-19 diagnoses on Thursday. However, in an email on Saturday, GOP officials said that no GOP members with a known positive COVID-19 test or symptoms attended Thursday's session.

GOP officials said the meeting ahead of the special session, which Senjem attended, was held in a large room with social distancing. After Senjem learned of his positive test, the GOP says it notified other GOP senators on Monday.

But, DFL officials say the party should have been alerted.

Gov. Walz wrote in a statement Saturday, “When COVID-19 spreads from one person to another, it does not care who you are or where you are from. The virus doesn’t operate along party lines, and so neither can we. Each of us has a personal responsibility to take steps to slow the spread. And if we know of a positive case, we have a moral obligation to share that information with others so that they can protect themselves and their families.”

“As elected officials, we must lead by example. I simply do not understand why Senate Republicans chose only to share that there were positive cases in their caucus with members of their own party before Thursday’s floor session. Injecting partisanship into public health, their actions knowingly put the safety of their DFL colleagues, non-partisan staff, and Capitol law enforcement at risk. We must put aside our differences and look out for our neighbors. At the end of the day, we are all Minnesotans.”

In a statement, DFL Chair Ken Martin wrote, “Minnesota Senate Republicans’ decision to cover up a COVID-19 outbreak within their ranks immediately before a special legislative session is a genuinely stunning failure of basic human decency that could land people in the hospital or worse. Paul Gazelka and Senate Republicans owe their DFL colleagues and the non-partisan staff at the Minnesota capitol an immediate explanation for why they decided to needlessly put people in harm’s way."

Breaking from recent trends, on Thursday the Senate did not attempt a vote to strip Governor Walz of his emergency powers to control COVID-19. Gazelka would not say if Senator Senjem's positive test played a role in that decision.