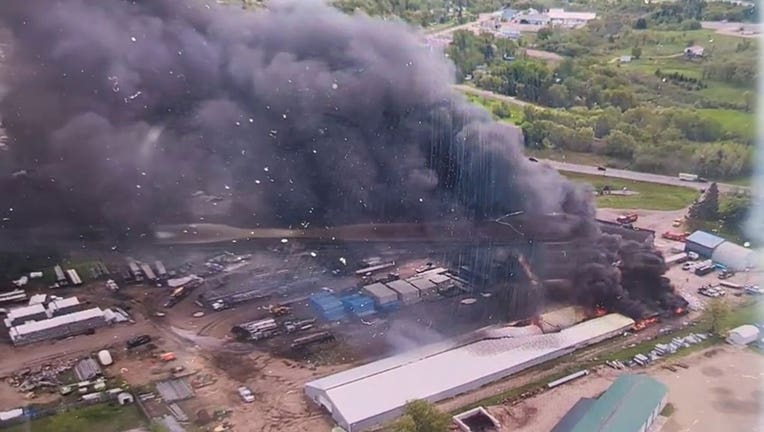 WADENA, Minn. (FOX 9) - Wadena, Minnesota firefighters were forced to flee for shelter on Monday as a tornado warning was issued while crews were working to put out a massive fire.

The city says fire crews were forced to leave the fire scene and shelter in the local courthouse while waiting for the severe storms to pass. The same system caused widespread damage to the small city of Forada, about an hour's drive south of Wadena, where a tornado touched down.

The city says fire crews were forced to leave the fire scene and shelter in the local courthouse while waiting for the severe storms to pass. The same system caused widespread damage to the small city of Forada, about an hour's drive south of Wadena, where a tornado touched down.

Monday's fire broke out at Minnesota Valley Irrigation shortly before 3 p.m. at an equipment shop for the company on Ash Avenue Northeast. When crews arrived, there was heavy fire on the southern side of the building creating a massive plume of smoke. Multiple fire crews from neighboring cities were called in to help with the battle.

Inside the building, firefighters say there were multiple pieces of machinery including irrigation computer system controllers, irrigation equipment, and potato-spraying chemicals. Because of the heavy smoke and concerns about the chemicals, the city put a temporary "shelter in place" order in effect at 3:48 p.m.

About an hour and 15 minutes later, firefighters have to evacuate the scene. At that point, crews say the fire was mostly knocked down besides some hotspots. Officials say they were forced to leave the scene due to a tornado warning with reports of a tornado in Eagle Bend, Minnesota, about 20 miles south of Wadena in Todd County. Fire crews moved to the Wadena County Courthouse for about 30 minutes until it was safe enough for crews to return.

The damage left behind by the massive fire at Minnesota Valley Irrigation in Wadena, Minnesota.

Firefighters remained at Minnesota Valley Irrigation until about 8 p.m. to extinguish hotspots – though crews were called back overnight to knock down some hotspots that had rekindled around 3 a.m.

The warehouse was a complete loss, firefighters say, along with several pieces of equipment inside. The total damage costs from the fire are not yet known. Crews are also working to determine the cause but firefighters say it appears to be accidental.

In a statement, a spokesperson for Minnesota Valley Irrigation writes: "Minnesota Valley Irrigation is fortunate that the only loss we suffered was our building and inventory. Our team members are all safe and ready to serve our customers. Our suppliers have assured us that new products are on the way in the weeks ahead. While this is a setback, we are moving forward business as usual while we rebuild. MVI has been in Wadena for 30 years and will be here for a long time to come. We are part of this community and appreciate the outpouring of support from area residents, customers and friends. We particularly want to thank all the first responders for their quick and capable containment of this fire and continuing to keep our community safe."