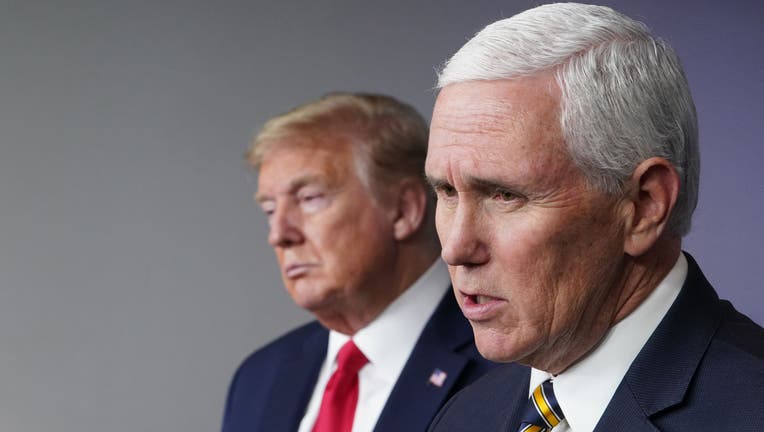 US President Donald Trump listens to US Vice President Mike Pence speak during the the daily briefing on the novel coronavirus, which causes COVID-19, in the Brady Briefing Room of the White House on April 22, 2020, in Washington, DC. (Photo by MANDE (Getty Images)

ROCHESTER, Minn. (FOX 9) - Vice President Mike Pence will visit Mayo Clinic's facilities in Rochester next week, marking his second trip to Minnesota in the midst of the coronavirus outbreak.

Pence's most recent trip to Minnesota came March 5, when he toured 3M in Maplewood to discuss increased production of N95 respirator masks for health care workers.

While in the Twin Cities that day, Pence foreshadowed problems to come with the lack of testing. The issue has plagued Minnesota and other states from the outset.

“We don’t have enough tests today to meet what we anticipate will be the demand going forward," Pence said, promising more testing in "a matter of weeks."

State, U of M, Mayo Clinic sign deal to increase testing in Minnesota

Gov. Tim Walz says a deal with the University of Minnesota and Mayo Clinic will allow for testing of up to 20,000 people per day, which his health commissioner said could be achieved within "a few weeks."

On Wednesday, Gov. Tim Walz announced a deal with the University of Minnesota and Mayo Clinic so that all Minnesotans with virus symptoms could be tested.

The governor promised the move would lead to 20,000 Minnesotans getting tested every day. Walz wouldn't give a timeline, but his health commissioner said the goal would be achieved within "a few weeks."

As of Wednesday, 179 Minnesotans had died from the coronavirus. More than 70 percent were residents of long-term care facilities.