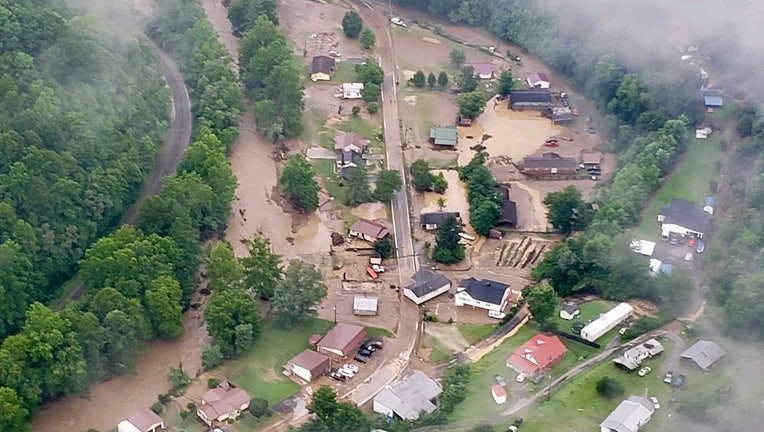 Damage from flash flooding in Buchanan County, Virginia, is seen from the air on July 13, 2022. (VDEM/Twitter)

BUCHANAN COUNTY, Va. - Authorities said everyone has been accounted for, and no deaths were reported in the rural mountainous region of western Virginia after storms dumped more than half a foot of rain on Tuesday evening.

The Virginia Department of Emergency Management and local rescue crews went door-to-door in the area around Pilgrims Knob in search of flooding victims.

Crews were out all night and into the morning reaching out to those in the flooded area that were reported missing. The Buchanan County Sheriff’s Office said as many as 40 people were missing at one point.

"They were all located," said Chief Deputy Eric Breeding with the Buchanan County Sheriff's Office.

Water still covers part of a road in Buchanan County, Virginia, on July 13, 2022, after flash flooding in the area overnight. (Billy Bowling/Twitter)

Authorities said their immediate need at this time is cleaning supplies such as mops, buckets, shovels. These items can be taken directly to the Twin Valley Elementary School in Oakwood. Monetary donations to support the community with the recovery can be made to the United Way.

Currently, there are three road closures in the Whitewood area -- Route 628, Route 635 and Route 715 which will be closed for an extended period of time because of the damaged bridge on that road.

"We do anticipate the other roads to be cleared out, hopefully by the end of the day, or at least within the next day or two," Breeding said. 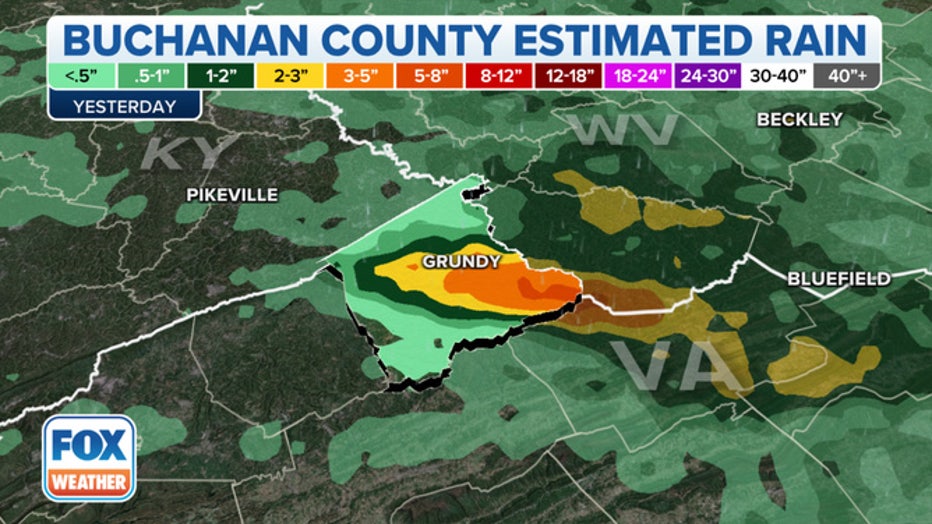 Radar estimates as much as 8" inches of rain fell on Tuesday in western Virginia. (FOX Weather)

Cleanup and damage assessments are expected to happen over the next several weeks. The Virginia State Police and the Buchanan County deputes will be patrolling these regular these areas regularly to stop any looting.

"Many, many homes not only damaged, a lot are completely destroyed. A lot are no longer there. They have been washed down the river gone," Buchanan County Sheriff John McClanahan said.

Officials believe more than 100 homes were either damaged or destroyed by the flooding. Crews had difficulty accessing the hardest hit areas because of mudslides and blocked roadways.

HOW TO WATCH FOX WEATHER TV

A witness told FOX Weather that homes were swept more than 300 feet off foundations and the area looked like a war zone.

"Once I had gotten down into there, I could see the gravity of the whole situation. At least from where I parked, four homes were completely swept off of their foundations. It was quite devastating to walk around," storm chaser Billy Bowling told FOX Weather.

Due to the devastation, Virginia's governor declared a State of Emergency on Wednesday to free up funds and resources for the hardest hit areas.

Thousands of customers were without power in the region, and officials urged residents to boil water for consumption uses.

An emergency shelter was opened at a local elementary school for flood victims to reunite with loved ones.

7 FACTS YOU SHOULD KNOW ABOUT FLASH FLOODS

"The topography of this area is very tall mountains. And they drop sharply into little valleys and hollows, in these communities that kind of live at the bottom of those hollows. They basically become a lake waiting to happen when we have big instances like this," Bowling said.

Rural areas near the Kentucky-West Virginia border have a history of seeing significant flooding when rain events train over the region for hours.

The U.S. Army Corps of Engineers is in the midst of a flood reduction project to lessen the threat to homes and businesses in the county.

So far, there have been no reported fatalities from the most recent event, but officials say search and rescue crews are a long way from completing their operation.

The weather system that triggered the flash flooding also caused widespread wind damage in the mid-Atlantic and Northeast.

Damaging wind gusts of more than 80 mph caused trees to topple onto houses and blocked roadways.

During the height of the storms, more than 300,000 customers were without power.