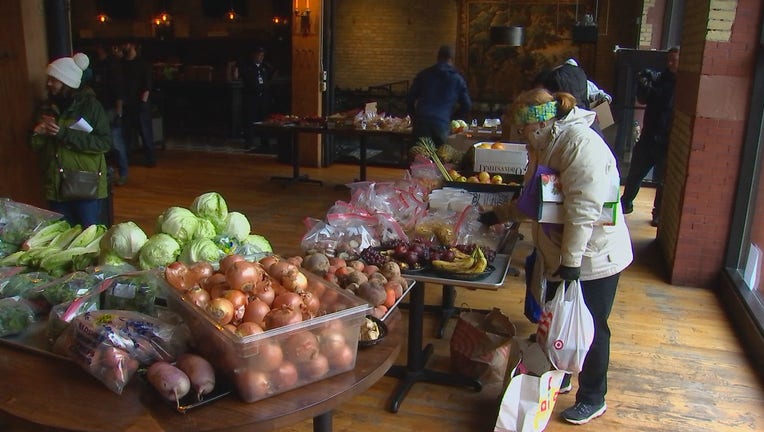 Twin Cities chefs, faced with food surpluses and fewer people to serve, offered their food to people who need it most.

ST. PAUL, Minn. (FOX 9) - Twin Cities restaurant owners and chefs brought in truckloads of fresh meals and produce to those in need for free Thursday.

The produce giveaway was supposed to start at 3 p.m., but people were lined up early and they had so much food they started letting people in before the start time.

Twin Cities restaurant owners and chefs brought in truckloads of fresh meals and produce to those in need for free Thursday.

10 people at a time were allowed through the doors at Public Kitchen in St. Paul to load up on all kinds of fresh produce like cucumbers, broccoli, peppers and more.

It all came after restaurant owner Justin Sutherland started looking through his coolers and realizing he couldn’t sell all the fresh produce he had after Gov. Tim Walz ordered all restaurants to close to dine-in eaters this week. With that, and having to lay off 300 people, he decided he would give it all away.

The word got out to other restaurant owners who pitched in and pretty soon they were ready to help out hundreds of people. With so many people suddenly out of work, it couldn’t come soon enough.

“I’ve seen nothing but a strong community coming together,” said Jason Sutherland, a restaurant owner. “Gratitude, people looking out for each other, people coming on behalf of their elderly neighbors and people that can’t make it out. You know, this crisis, it’s just an incredible coming-together of a pretty outstanding community,” said Sutherland.

“I’m a single mom,” said Brittany Coleman. “I also didn’t think this was going to happen and we had no groceries at the time. Then, when I went grocery shopping, nothing’s there. It’s also really hard to shop when you don’t have any income and you don’t know when you’re going to get income again. But, I found everything I needed basically.”

In addition to the free produce, there were free meals being handed out as well from two Farewell food trucks. Sutherland said he would keep handing out food until all the food was gone or the crisis was over.

Late Thursday afternoon, trucks were reportedly still bringing in food and people were still lining up.