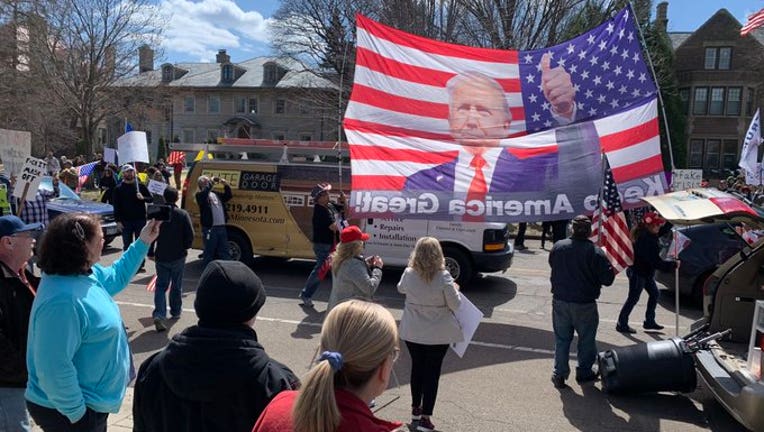 Protesters with giant “Keep America Great” Trump flag and walking it up and down Summit Avenue in St. Paul, Minnesota on Friday, April 17, 2020. (Theo Keith/FOX 9 / FOX 9)

ST. PAUL, Minn. (FOX 9) - Several hundred protesters gathered outside Minnesota Gov. Tim Walz’s home Friday calling for the state to be reopened, but Walz said doing so would be “reckless” in the midst of the coronavirus pandemic.

President Donald Trump endorsed the protest, tweeting “LIBERATE MINNESOTA!” on Friday morning. The protest was noisy but mostly civil – save for some profane signs, a man who walked down Summit Avenue with his middle fingers extended, and a woman who told a reporter, “Don’t get near me. I’ve got COVID!”

Several hundred protesters gathered outside Minnesota Gov. Tim Walz’s home Friday calling for the state to be reopened, but Walz said doing so would be “reckless” in the midst of the coronavirus pandemic.

Walz has issued a stay-home order until May 4, which effectively shuttered thousands of businesses and schools, though he is allowing some outdoor recreation companies to reopen Saturday.

“I just want to nip it in the bud, let him known how we feel, that we’ve got to get back to work, we have to get this economy going again,” said Bruce Clark, who said he closed his auto repair shop in the west Metro because there was a lack of business.

Few of the protesters wore masks, and many did not follow social distancing guidelines. 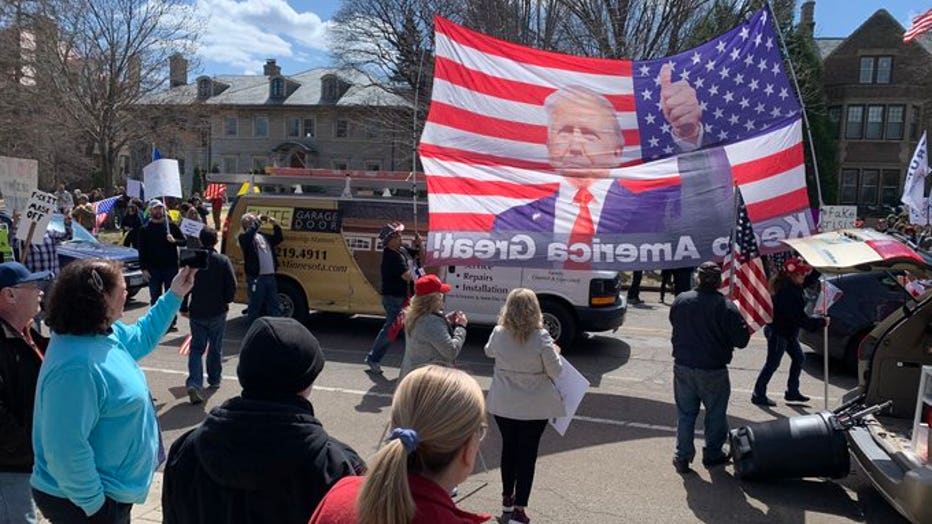 Protesters with giant “Keep America Great” Trump flag and walking it up and down Summit Avenue in St. Paul, Minnesota on Friday, April 17, 2020. (Theo Keith/FOX 9 / FOX 9)

Walz said at a Friday afternoon news conference that he would defend the protesters’ right to speak out, but he said they were advocating for “really reckless behavior.”

“If we went back to how we were operating in January, we would kill lots of people, especially those on the front line,” Walz told reporters.

Minnesota has had 111 deaths related to the coronavirus, and the 17 new cases since Thursday reflected the biggest single-day increase.

Golf courses, outdoor shooting ranges, marinas and bait shops will be allowed to reopen Saturday morning after Walz issued a new executive order exempting them. The governor urged people to stay near their homes and not to travel around the state to recreation spots.

But the broader stay-home order remains in effect until at least May 4. Walz did not make an announcement on schools Friday, but said it’s unlikely students will return to the classroom this academic year.

Beyond May 4, Walz said there would be a gradual reopening.

Businesses that can implement social distancing could be among the first to go back, he said. On the other hand, the governor said “I don’t think in the short run we’re going to see Target Field filled up with people.”

Trump’s “Liberate Minnesota” tweet was the same slogan used by the protesters. It contradicts the social distancing guidelines that his own administration has advocated, and came one day after Trump told governors they would have the authority to reopen their states on their own timelines.

At the St. Paul protest, there was a lot of Trump 2020 gear, and some people flew large Trump flags over the crowd. The protesters did not block Summit Avenue. St. Paul Police officers remained in their cars parked a block away.

Ann Johnson of Bloomington wore a face mask while holding a sign advocating for the Minnesota economy to be reopened.

“I’ll wear a mask to ballgames and hockey games, wherever I have to go. But please, open the economy. That’s why I’m here,” Johnson said.