‘Tomorrow that number could rise’: 241 NYPD officers have died from 9/11-related illnesses

The death toll of New York police officers from exposure to deadly toxins from the wreckage in the years since the attacks has grown to 241.

NEW YORK - An NYPD spokesperson confirmed that there have been 10 times the number of deaths of NYPD officers from illnesses related to the Sept. 11, 2001 terror attacks than those who lost their lives on the day the towers fell — and that number will likely grow.

The death toll of New York police officers from exposure to deadly toxins from the wreckage in the years since the attacks has grown to 241. Twenty-three officers died just moments after the destruction of the World Trade Center towers.

According to The Mesothelioma Center, nearly half a million people, including more than 90,000 workers, were exposed to deadly carcinogens following the collapse of the Twin Towers amid the deadliest terror attack on U.S. soil.

In fact, firefighters that were exposed to World Trade Center dust proved to be 19 percent more likely to develop cancer than the general population, according to a study in 2011 examining carcinogen exposure in the first seven years after the Sept. 11 attacks.

New York City police detective Luis Alvarez recently passed away from colorectal cancer, which he attributed to the three months he spent digging through rubble at the World Trade Center’s Twin Towers after the terrorist attack.

He was known as a leader in the fight for the Sept. 11 Victims Compensation Fund that was created in order to compensate the victims affected by 9/11 and its aftermath. 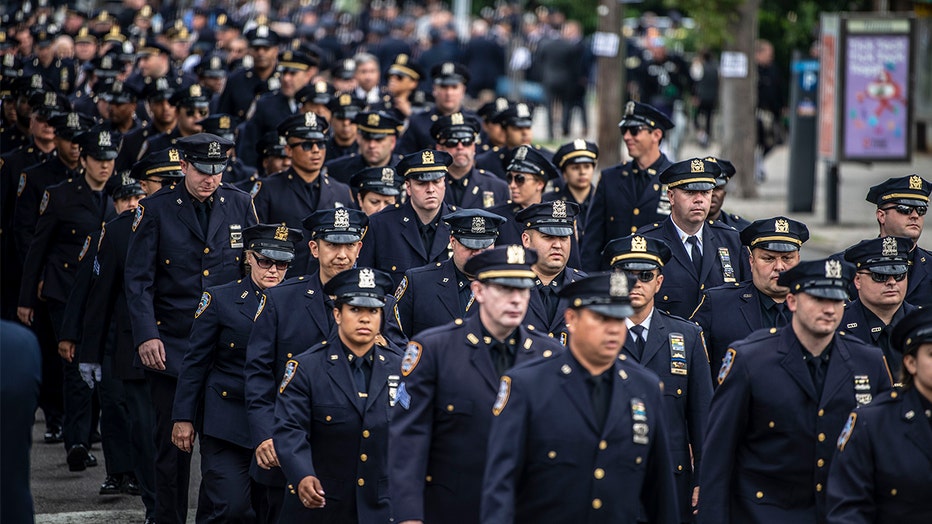 Speaking at his funeral in July, New York City Police Commissioner James O’Neill said more than 200 police officers who responded to 9/11 have died from serious illnesses in the years since the terrorist attacks.

“Tomorrow, that number could rise,” he said. “In the years ahead, it surely will.”

Before his death, Alvarez appeared alongside former “Daily Show” host Jon Stewart in June to plead with Congress to extend the compensation fund that was slowly becoming insufficient to pay off all pending claims.

RELATED: Mitch McConnell on Jon Stewart's 9/11 Fund outrage: 'I don't know why he's all bent out of shape'

“This fund isn’t a ticket to paradise, it’s to provide our families with care,” a frail Alvarez told a House Judiciary subcommittee June 11. He added, “You all said you would never forget. Well, I’m here to make sure that you don’t.”

Stewart called the sparse attendance at the June 11 hearing "an embarrassment to the country and a stain on this institution.“

Following that House Judiciary subcommittee, Republican Sen. Rand Paul blocked a bipartisan bill that would have ensured a victims' compensation fund related to the Sept. 11 attacks would never run out of money.

The move by Paul came months after comedian Jon Stewart sharply criticized Congress for failing to act on renewing the bill in which its funds were depleting due to the increasing number of people applying for coverage.

Stewart, a longtime advocate for 9/11 responders, said lawmakers were showing "disrespect" to first responders now suffering from respiratory ailments and other illnesses as a result of their recovery work at the former World Trade Center site in New York City.

On July 29, President Donald Trump signed a bill ensuring that the victims’ compensation fund helping those impacted by the Sept. 11, 2001 attacks never runs out of money, ending years of legislative gridlock and extending the fund until 2092.

But it’s not just first responders who have been affected by devastating illnesses triggered by the 9/11 terror attacks.

The Centers for Disease Control and Prevention estimates that of its members who have joined the World Trade Center Health Program, there are as many as 15 different types of cancers that currently affect both responders and survivors, with prostate and non-melanoma skin cancer being the most common.

According to the CDC, as many as 2,219 responders and 708 survivors have been affected by prostate cancer as of June 30, 2019. Hundreds of other residents who have joined the health program report that they have been diagnosed with other illnesses such as leukemia and chronic respiratory disorder.