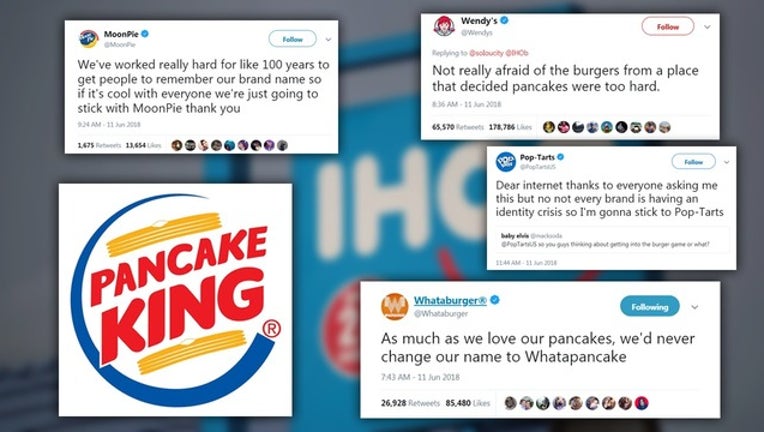 IHOP finally revealed on Monday what the ‘b’ in their name change to ‘IHOb’ stands for, and the insults quickly followed.

Texas-based Whataburger was one of the first companies to chime in on the name change.

“As much as we love our pancakes, we’d never change our name to Whatapancake,” it tweeted.

Burger King took it a step further and altered its logo on all its social media platforms to “Pancake King.”

Other companies like MoonPie and Pop-Tarts threw some not-so-subtle shade at IHOb.

“Dear internet thanks to everyone asking me this but no not every brand is having an identity crisis so I'm gonna stick to Pop-Tarts,” their tweet said.

“We've worked really hard for like 100 years to get people to remember our brand name,” MoonPie said. “So if it's cool with everyone we're just going to stick with MoonPie thank you.”

But perhaps the most savage tweet of all came from Wendy herself.

When asked if Wendy’s was going to let IHOb sell burgers on their block, they responded: “Not really afraid of the burgers from a place that decided pancakes were too hard.”

IHOb has yet to respond to their competitors’ jabs. We’re guessing they’re too busy applying ice to their burns.