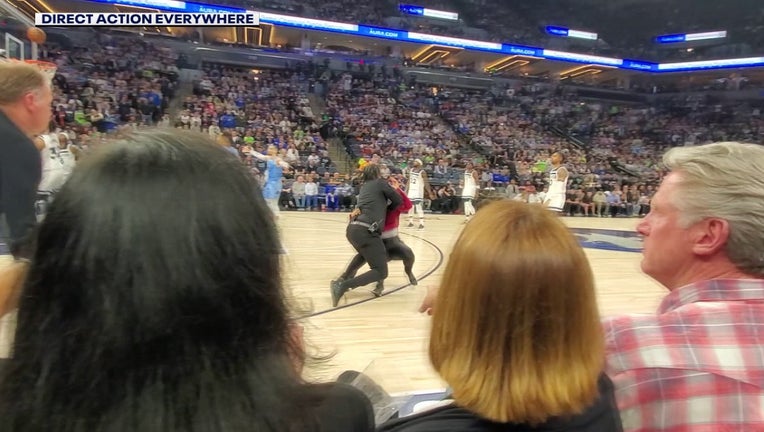 Video from the activist group shows the protester jumping out of stands and getting tackled almost immediately. (Direct Action Everywhere / Supplied)

MINNEAPOLIS (FOX 9) - For the third time in less than two weeks, protesters disrupted a Timberwolves game.

The security team at Target Center acted swiftly in response to the disruption Saturday night, as an animal rights protester stormed the court during the third quarter.

An animal rights activist attempting another protest at the Target Center during a Minnesota Timberwolves game was stopped quickly in her tracks by a quick acting security guard.

The public has been praising the quick response by security, who tackled and got the woman off the court in about ten seconds. Local security expert Michael Rozin called the response "seamless."

Rozin is co-founder of Rozin Security, a Twin Cities security firm that’s provided protection for major events such as Super Bowl Live and venues such as Mall of America. He says it’s very possible security guards had identified the woman as a threat long before she acted on it.

"One of the most effective techniques that I have discovered is behavior threat assessment methods that allow security personnel to look at the crowd and identify individuals who might have a tendency to cause disruption," he said.

Rozin said his only concern is how the protester got so close to her intended target, Timberwolves part-owner Glen Taylor. It appears the woman was seated in the row directly behind Taylor.

The woman who filmed the incident, also associated with the animal rights group, can be heard saying, "I paid for this seat."

"The right thing to do is take a close look at what was known, what was observed, with active protocols and were there any gaps," said Rozin.