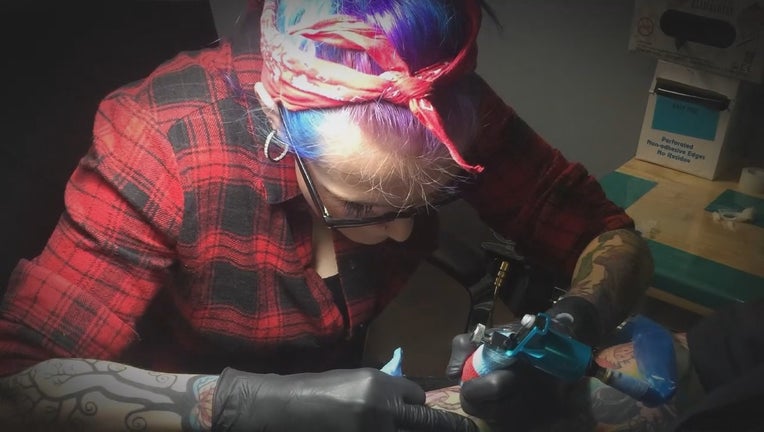 Nicole Baker owns a tattoo parlor, which missed out on funding during the first round of the PPP. (Nicole Baker)

ELK RIVER, Minn. (FOX 9) - Congress is set to approve a second round of assistance for small businesses totalling $349 billion through the Paycheck Protection Program (PPP). But the money is expected to go even faster the second time around.

“We are not going to have the herky-jerky start,” said Robert Scott, a Great Lakes Regional Director for the Small Business Administration (SBA) tasked with running the program. “We are going to hit the ground running,” said Scott.

Congress is set to approve a second round of assistance for small businesses totalling&nbsp;$349 billion through the Paycheck Protection Program (PPP). But the money is expected to go even faster the second time around.

The loans, which are made by individual banks, are designed for small businesses with 500 or fewer employees. It is a forgivable loan as long as 75 percent of the money goes to payroll. According to the SBA, 70 percent of those loans were less than $200,000.

But problems plagued the initial rollout. Many small businesses said they quickly turned in their applications to local banks, only to be kept waiting as larger businesses seemed to make it to the front of the line.

“It was a perfect storm for our clients not to get funded,” said Patrick Pariseau, Director of Financing Solutions for MEDA, the Metropolitan Economic Development Association, a group that functions as an incubator for small minority businesses.

He says many of their clients thought they were in line to be accepted into the program and kept waiting for a call back from their bank. If the call ever came, it was to tell them the program was already out of money.

Lawsuits have been filed against Wells Fargo, claiming the company gave preference to larger businesses and their own clients.

“Instead of teddy bear, you have to be a grizzly bear,” said Pariseau. “‘Where is my application? Where do I stand?’”

“It blows my mind,” said Nicole Baker, who owns Subjective Art Tattoo in Elk River. She says the money would’ve made a real difference to her nine full-time employees, who as independent contractors don’t qualify for unemployment.

“I waited in line, like I was supposed to, and then got an email two days later, sorry,” said Baker.

She applied through her bank of 17 years, which she declined to name because she’s still hoping for a loan.

Scott, the regional director for SBA, believes many larger banks were initially skeptical of the program because of SBA’s reputation of not guaranteeing defaulted loans if “every T was not crossed.” He believes banks are now confident in the program.

His advice to small businesses for round two is to already have your paperwork together, like tax returns and payroll, and maybe apply to smaller banks.

“At least at our institution, we didn’t have time to prioritize who goes first and who goes second,” said Jerry Baack, CEO of Bridgewater Bank. “Just get the application out.”

Baack estimated that about a quarter of their loans through PPP were new customers. He hopes to build on that loyalty and gain market share from his bigger competitors.

Baker, who owns the tattoo shop, was disappointed to learn that large franchises, like Potbelly and Shake Shack exploited loopholes and got $10 million from a program intended to help small businesses.

“Big places getting money when we are a small shop that gives back to the community. It’s extremely frustrating,” said Baker.

But unlike tattoos, there may be a second chance to get this right.