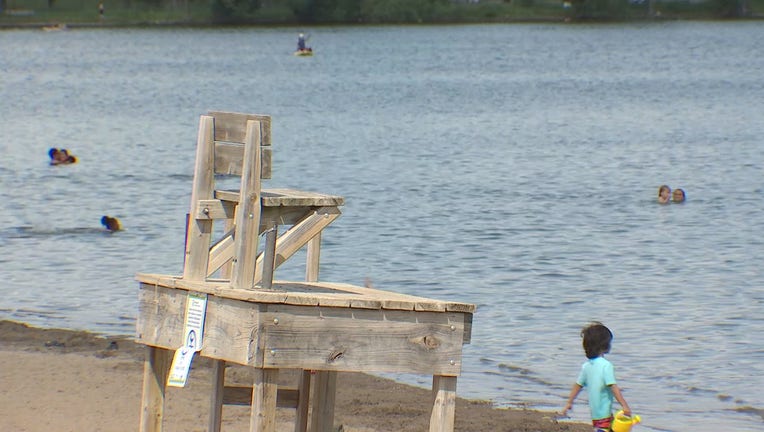 Nokomis Main Beach, Cedar Point Beach and Wirth Beach are the only public beaches in Minneapolis that will have lifeguards this summer. Normally, the board would fill around 150 lifeguard positions, but they say, right now, they have less than half of that number.

Lifeguard shortage has Twin Cities residents swimming at their own risk

A lifeguard shortage around the Twin Cities area is leaving lifeguard chairs empty and putting more swimmers at risk.

"If we could hire the amount of lifeguards we really need to run our system, which is about 150, yes, we would absolutely have the ability to budget for that," Sarah Chillo, Aquatics Manager for the Minneapolis Park and Recreation Board, said.

Minneapolis Parks aren’t the only ones experiencing the shortage. Ramsey County will have lifeguards at one beach this summer, at Lake McCarrons County Park. During the 2019 season, they had lifeguards at five beaches.

A spokesperson for Three Rivers Park District said they are having a hard time finding lifeguards too. They’re even offering to provide training to applicants so they can get their lifeguard certification.

A lack of access to certification programs because of COVID-19 restrictions is one reason Chillo thinks they’re having a hard time filling positions.

"By the time we were able to teach the classes a lot of people moved on," Chillo said.

On top of a lack of lifeguards, there has been limited access to swimming lessons because of the pandemic. The YWCA in Minneapolis has started offering classes again after almost a year of having to limit their programs. Alex Aguilar, general manager of Minneapolis YWCA says, classes are starting to fill up again. Many families are making up for missing out on classes last year.

"They are now looking to make up time and jump back on those life schedules," Aguilar said.

The YWCA has options for families to get access to swimming lessons at low costs.

The Minneapolis Parks and Recreation Board also offers free lessons.

The Red Cross also has an app and other helpful online resources for families to practice swimming skills on their own.

Three Rivers Park District is still hiring lifeguards. You can find more information at this link.