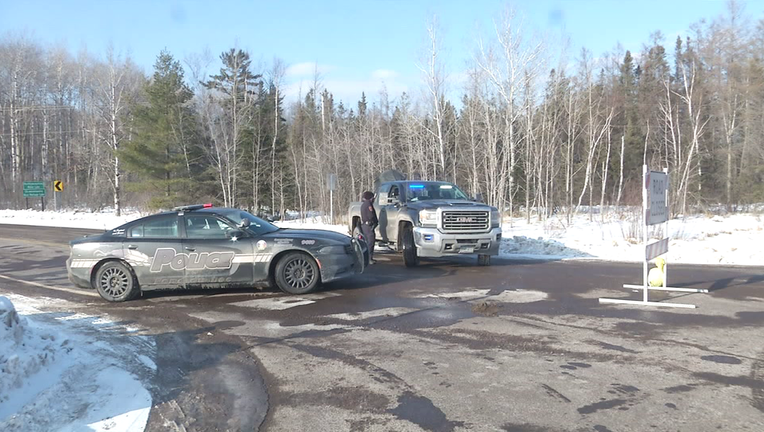 Investigators blocked the area near the Line 3 construction site after a "suspicious package" was thrown by protesters. (Supplied)

PERCH LAKE TOWNSHIP, Minn. (FOX 9) - A "suspicious package" that deputies say was thrown by members of a Line 3 pipeline protest in northern Minnesota was not an explosive, deputies said Friday.

The Carlton County Sheriff's Office sent out a warning to nearby residents Friday afternoon after the device was thrown by members of a crowd of protesters at the construction site on Ditchbank Road in Perch Lake Township, west of Cloquet, Minnesota.

According to deputies, members of the Fond Du Lac Police Department had responded to disperse protesters who were blocking the road around 12:40 p.m. As the crowd was moved, police say three people within the crowd had thrown packages before leaving the area.

At the scene, investigators called in the bomb squad to check out the devices while sending out an alert to nearby residents and evacuating about forty homes within a half-mile radius.

But, deputies say, after careful examination, the packages turned out not to be a threat. Investigators say members of the public are being allowed to return to their homes.

Now, the sheriff says they will pursue charges against people who created a "replica device."

Anyone with information on the incident is asked to contact the sheriff's office.

The pipeline project has been the subject of controversy and protest, especially from Native American groups who worry about the potential impacts of the project and potential leaks on the delicate ecosystem of northern Minnesota.