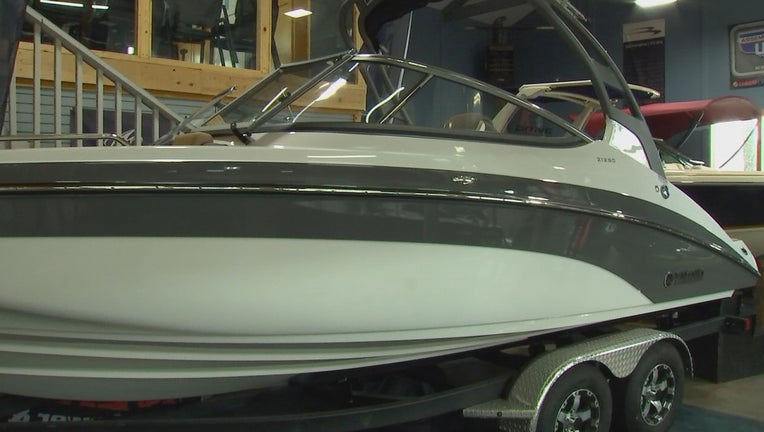 If you are looking for a new boat for the summer, experts says you will have tough luck getting your order before the end of the season.

(FOX 9) - As the weather starts to turn warm, if you are lucky enough to be in the market for a new boat this summer, you are going to run into some trouble getting it on the water before fall.

Boats normally are delivered in about ten weeks but, right now, it's more like four or maybe five months. The delays are due to several factors including, as you might expect, the pandemic and high demand. But, on top of those factors, we're told two recent events half a world apart are also slowing things down.

Boating season is right around the corner, but some Minnesotans are finding it hard to find boats in a market lacking inventory.

"If we ordered a boat today, say a WaveRunner for example, you might not get the boat 'til the end of October," said Kevin Kerkvliet at River Valley Marine.

The pandemic has made doing anything outdoors popular, so demand for a boat is high. But inventory is low in part because of the Texas cold snap in February.

"The foam plants that do all of the foam inserts for the boats, that keep the boats afloat, all of that froze," said Kerkvliet.

Along with that, remember that giant ship blocking the Suez Canal? If you ordered a boat recently, your handles, flooring, and electronics were likely stuck on a ship behind it -- unable to get through.

In a letter to customers, River Valley Marine explained the challenges, saying, "Every day seems to get worse, not better, in terms of supply chain issues."

But while they can’t promise a quick delivery date they do promise this: "it’s just a matter of keeping the communication open, whether it's good, bad, or ugly communication. The customer truly wants to know what’s going on," said Kerkvliet.

The delays are obviously not just a Minnesota boat dealer issue -- it’s industry-wide. They say even used boats are hard to come by right now.