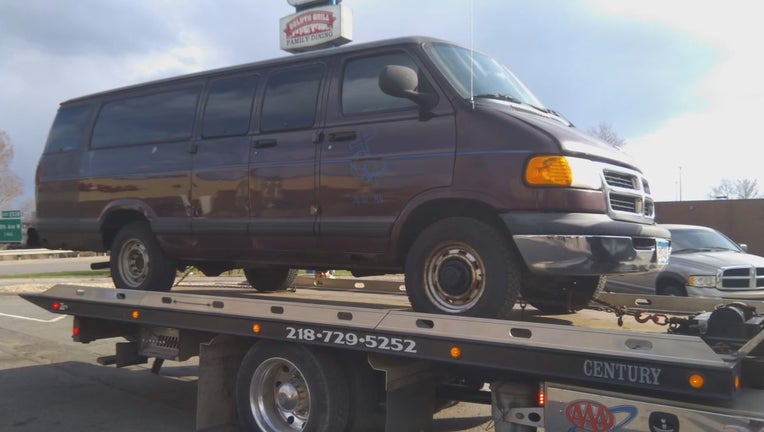 A van stolen from a north Minneapolis church has been found. (FOX 9)

MINNEAPOLIS (FOX 9) - A small Baptist church in Minneapolis has been reunited with their stolen van, but after seeing the damage to the vehicle, leaders are wondering if it can ever be used again.

In a crowded mechanic’s lot, Youth Minister Renee Lucas is still in disbelief

“There’s a lot of memories in this van,” said Lucas.

Her old van, however, is not the same.

A church’s stolen van was recovered

The small baptist church thinks the van may be damaged beyond repair.

“So obviously they broke the window,” she said, pointing out the damage.

Whoever stole the van, trashed its inside. Even the church’s name and logo was stripped from the van’s exterior.

Then there’s the engine. The cover was cut loose. Cables were cut. The van may no longer drivable, which could be a big loss for the ministry.

Morrison Baptist Church is a small Minneapolis congregation at North 4th Street and 34th Avenue North. For years, the church used the van to deliver food and to bring the congregation to Sunday service. Earlier this month, it disappeared from its parking spot right out front.

“We were hoping somebody was using it to get around for a little bit,” said Lucas. “But, they were pretty destructive to it.”

If it can be fixed, the church is doubtful it can afford the cost. In a season of new beginnings, they have faith in above.

“So, this is an offense to Him to take His van and destroy it this way, but we know that He will provide for us,” said Lucas. “And so, we’re just waiting to see what He does. So, we have hope definitely.”

The van turned up at the impound lot this week after it was abandoned and towed. The church is working with the mechanics at Bona Brothers in Fridley to see if it's even worth fixing.