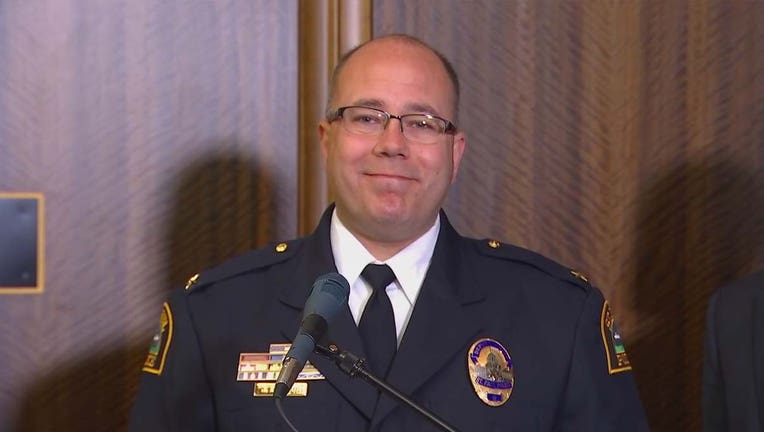 Mayor Melvin Carter selected Ellison to temporarily replace Todd Axtell, who has been chief since 2016 and has served as a police officer for 33 years. Axtell announced last October he wouldn't seek a second six-year term. His last day is June 1, and Ellison will take over at 5 p.m. that day.

As a patrol officer and an investigator with the St. Paul Police Department for more than 20 years, Ellison has experience in several areas including narcotics, special investigations, the juvenile unit, technology, traffic and pedestrian safety. As deputy chief of the support services division, he has worked to revitalize the downtown area and address public safety concerns, Mayor Carter said during the news conference.

"I want to thank you again to Chief Axtell for your leadership and ensuring that among the many exceptional leaders we have in our department that we have a teammate and Deputy Chief Ellison, who can usher our department forward during and through this transition," Carter said.

St. Paul Mayor Melvin Carter selected Deputy Chief Jeremy Ellison to temporarily replace Todd Axtell, who is ending his term in June after being the city's police chief since 2016.

Ellison, who says he does not have plans to pursue the permanent position, is excited and honored to take on the important role. His goals include keeping the patrol force adequately staffed and continue collaborating with the community to meet its needs.

"My main goal is stability. The department needs strong leadership during times of change. There's a lot of anxiety both internally and externally," Ellison said. "I am confident that I have the skills and ability to be successful in this role."

His educational background includes a bachelor’s degree from Metro State and a master’s degree in leadership, administration, and education from the University of St. Thomas. He has also completed the School of Police Staff and Command at Northwestern University, according to the city's news release.

Meanwhile, a search committee will continue its process to select the top 5 candidates for the police chief position. Mayor Carter says he hopes to select a new permanent chief, based on the committee's recommendations, by late summer or this fall.

"We have committed ourselves since the beginning to not trying to rush the process, but in focusing on the thoughtfulness that is required; the public engagement that is required; to be able to ensure that once we name a permanent police chief, that that is someone who is going to be able to help continue to advance the tradition and legacy of leadership that this whole conversation is about today," Carter said. "I'm confident in the timeline that we're on."

MORE: Who is on the committee choosing the police chief candidates?