A Southwest Airlines flight attendant garnered a chorus of laughter while giving a campy safety demonstration on a July 5 flight from Nashville, Tennessee, to Atlanta, Georgia. (Credit: Brittney Abernathy via Storyful)

Spirit Airlines and Frontier Airlines agreed Wednesday to abandon their merger proposal, opening the way for JetBlue Airways to acquire Spirit after a months-long bidding war for the budget carrier.

The decision by Spirit and Frontier to terminate their deal was announced while Spirit shareholders were still voting on the proposal. It was apparent that despite the support of Spirit's board, shareholders were prepared to reject the deal.

Spirit CEO Ted Christie said he was disappointed in dropping the merger with Frontier.

"The Spirit board of directors will continue our ongoing discussions with JetBlue as we pursue the best path forward for Spirit and our stockholders," he said in a statement.

The Frontier offer was worth more than $2.6 billion in cash and stock, far short of JetBlue's all-cash bid of $3.7 billion.

A combination of Spirit with either Frontier or JetBlue would create the nation’s fifth-largest airline, although it would be still quite a bit smaller than American, United, Delta and Southwest.

Attention now will turn toward regulatory hurdles to a deal between Spirit and JetBlue. Spirit's board stood by the Frontier deal for months, in the face of a higher-priced offer from JetBlue, by arguing that antitrust regulators would never let JetBlue buy the nation's biggest budget airline and remove it as a competitor to higher-priced carriers. Not surprisingly, JetBlue disagreed with that view.

The Biden administration was always likely to take a close look at either deal. The president and his top antitrust official in the Justice Department have both indicated a dislike for corporate mergers.

Some analysts said that the small size of Frontier and Spirit would have earned them a pass from antitrust regulators in previous administrations, but not any more. Still, a JetBlue deal does appear more problematic, in part because the Justice Department is already suing to break up a regional partnership in the Northeast between JetBlue and American Airlines.

Frontier and Spirit announced their deal on Feb. 7, saying they would create a huge discount airline that would save consumers $1 billion a year in airfares by creating a powerful new competitor to American, United, Delta and Southwest.

The proposal would have brought together two very similar airlines — both tempt travelers with rock-bottom fares but tack on fees for some things that bigger carriers include with most tickets, from soft drinks to room for a bag in the overhead bin.

JetBlue is a more conventional airline that some travelers prefer because of its amenities including free TV and Internet access during flights. In that sense, Spirit seems an odd fit. 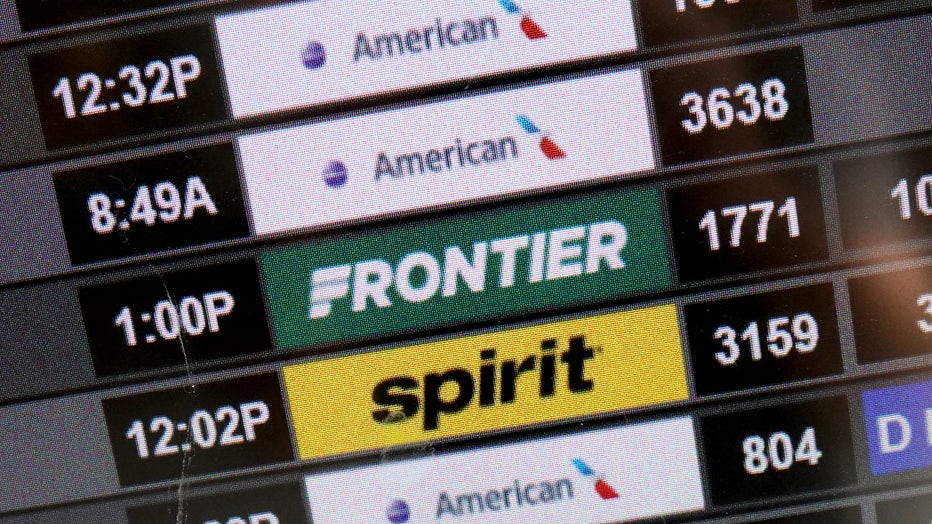 Flight information for a Spirit airlines flight is displayed on the information board at the Miami International Airport on July 27, 2022 in Miami, Florida. (Photo by Joe Raedle/Getty Images)

Once Spirit was in play for a merger, however, JetBlue CEO Robin Hayes decided that he could not sit back and watch two budget carriers combine and leapfrog his airline in size. On April 5, JetBlue started a bidding war by announcing its own plan to take over Spirit.

JetBlue saw acquiring Spirit as the best way to quickly add planes and pilots and break out of the second tier of U.S. airlines.

RELATED: Flight attendant bluntly shares travel tips: ‘We will not help you if you are mean’

JetBlue argued that it would help consumers too, by driving down fares more effectively than Frontier and Spirit.

New York-based JetBlue mounted a furious campaign to convince Spirit shareholders to reject the Frontier offer, and the tide seemed to turn in its favor. Spirit’s board postponed votes on the Frontier deal four time, and this month Frontier CEO Barry Biffle admitted his side was losing badly.

Both Frontier and JetBlue raised their bids in recent weeks, including and increasing break-up fees for Spirit shareholders.

At the end, Frontier offered $4.13 in cash plus 1.9126 shares of its stock for each share of Spirit. That was worth about $2.65 billion at Frontier's closing price on Tuesday, and Spirit shareholders would have owned 48.5% of the combined company.

JetBlue's bid was more straightforward — $33.50 per share, plus a ticking fee to cover any delay in regulatory review, which would push the value of the offer to $3.7 billion, all in cash.

JetBlue investors seem unimpressed with the airline's pursuit of Spirit. From the time JetBlue entered the bidding through Tuesday, its shares fell 45%, more than other U.S. airline except regional carrier Mesa.

Once Spirit's fate is settled, analysts believe that more mergers are possible among the smaller airlines — but not likely any deals involving American, United, Delta or Southwest, because of antitrust issues.

JetBlue and Alaska Airlines fought a bidding war over Virgin America in 2016, which Seattle-based Alaska won. Alaska's strength on the West Coast and JetBlue's network on the East Coast and the Caribbean have long made them the subject of merger speculation.