Moderna and Pfizer have announced that they are prepared to make tweaks to their COVID-19 vaccines and are preparing for a potential booster dose to combat the mutated coronavirus variants circulating around the world.

SEOUL, South Korea - Pet cats and dogs in the capital city of South Korea will be tested for COVID-19 for free if they come into contact with infected humans and show symptoms.

In an online briefing, Seoul official Park Yoo-mi said that pets found infected with the virus must be quarantined at their homes or a city-run facility for 14 days.

The announcement comes after a cat in the southeastern city of Jinju became the country’s first animal confirmed to have COVID-19. The animal belongs to a mother and daughter who were among dozens of confirmed patients associated with a Jinju religious facility.

Park said officials are ready to conduct free tests of pets starting Feb. 15. Authorities will test pets because they are in close contact with humans — and not all animals.

Other local governments in the country plan to launch similar tests for pets.

Though cases are rare, the U.S. Centers for Disease Control and Prevention says on its website that human-to-animal transmission of the virus can occur.

The CDC says a small number of animals in the U.S., including dogs and cats, have become infected with SARS-CoV-2, the virus that causes COVID-19, after close contact with people since the onset of the outbreak. Symptoms of the virus in animals can include fever, coughing, difficulty breathing or shortness of breath, lethargy, sneezing, nasal discharge, vomiting and diarrhea. 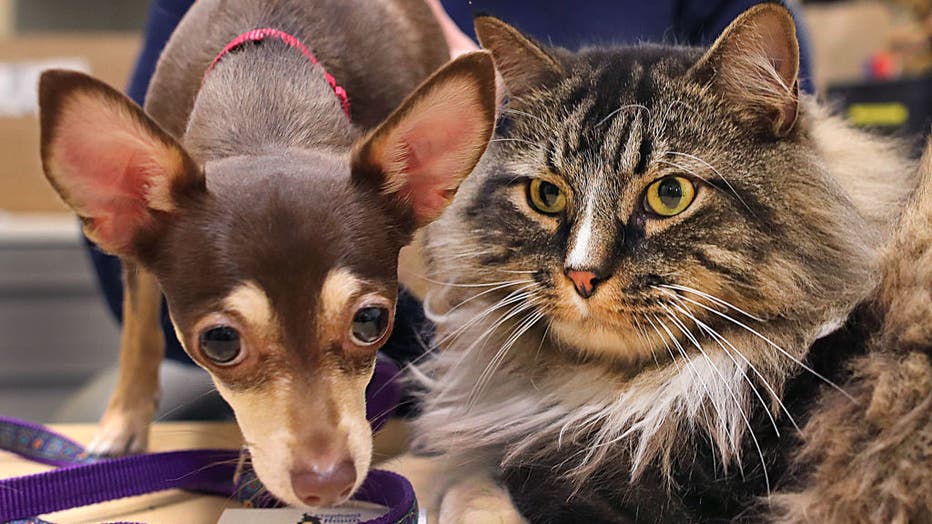 FILE - A Chihuahua and long-haired tabby cat are pictured in Boston, Massachusetts on March 22, 2019. (Photo by John Tlumacki/The Boston Globe via Getty Images)

Last spring, two pet cats in New York tested positive for the coronavirus — the first of such cases in the U.S. The cats had close contact with people confirmed or suspected to have had COVID-19, officials said. They had mild respiratory illnesses and were expected to recover.

The CDC says there is no evidence to suggest that animals play a "significant role" in the spread of the virus to people, and further studies are needed to fully understand if and how different animals could be affected by the virus.

Still, it is recommended that people who are suspected or confirmed to be infected with COVID-19 avoid close contact with their pets and have another member of their household care for them, according to the World Organisation for Animal Health.