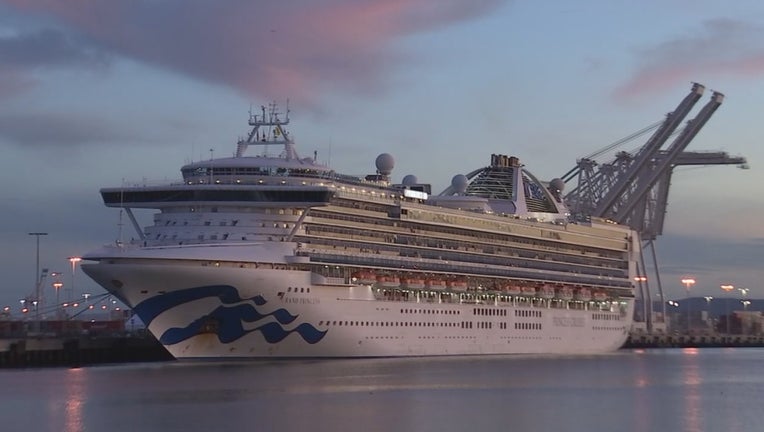 (FOX 9) - The journey home from the Grand Princess cruise ship, which was once quarantined off the coast of San Francisco, isn't quite over for some Minnesotans who were aboard.

Those who were being quarantined at the Miramar Marine Corps Air Station in San Diego returned home Monday night while some quarantined on other bases across the country are waiting for plans to return home.

Some Minnesotans aboard quarantined Grand Princess cruise return home, others wait for answers

The journey home from the Grand Princess cruise ship, which was once quarantined off the coast of San Francisco, isn't quite over for some Minnesotans who were aboard.

“That was probably one of the two worst experiences in my life. There’s no way to even explain it unless you’ve gone through it,” Minnetonka man Stan Herman said.

Herman boarded a Grand Princess cruise to Hawaii on Feb. 21. At the end of the two-week cruise, passengers on the ship were told they had been exposed to COVID-19. They spent the next several days quarantined to their quarters before docking in Oakland and being sent to U.S. military bases for observation and additional quarantine.

Herman was sent to a base in San Diego until he got word from Gov. Walz’s office Sunday night saying he, and other Minnesotans at that base, would be flown home on Monday. Herman said he was tested for COVID-19 on Sunday and was told it would take a few days for them to get the results. He was flown home anyway and told to self-quarantine.

Meanwhile, some Minnesotans sent to quarantine at other air bases are still not sure when they will return home.

Melanie and Keith Carlson, a couple from Monticello, were on the same Grand Princess cruise, but were sent to quarantine at Dobbins Air Reserve Base in Marietta, Georgia.

“We’re so jealous! We would love to be home as well,” Carlson said.

The Carlsons say they’ve been living out of a backpack with only one change of clothes since they arrived at the base on Wednesday. They say they’ve watched hundreds of people also quarantined on the base be brought home by their state leaders.

They say they’ve been in contact with Minnesota Governor Walz’s office and their U.S. Congressional Representative Tom Emmer trying to learn more about why they haven’t been brought home yet while other Minnesotans have.

“I don’t think we should be forgotten. We are Minnesotans and I would like to see them stand up,” Carlson said.

Both Carlson and Herman expressed frustration with the lack of organization and communication at the bases during their quarantine.

“I don’t have any problem with the people involved. Everybody has really done as good a job as they could to help us, but I do question the management of this. The organizing. That’s what needs to be vastly improved,” Herman said.

“I think we are seeing in a different light how the government can work. Some of it is good and some of it is not so good,” Carlson said.

Congressman Tom Emmer’s office released this statement from him regarding the Carlson’s situation saying:

“Our office has been in contact with constituents in quarantine throughout the country, and worked diligently to provide them access to information and ensure their safe return home. We have been in constant communication with HHS and the CDC on the Carlson’s situation specifically, as well as many others. Some Minnesotans like the Carlson’s have been transported back home and remain in quarantine here, while others are currently being assessed at military bases before being transported home. Every case is unique and being handled with the utmost caution and care which can lead to differing timelines for each individual. We will continue to work closely with the Administration and Governor Walz to ensure Minnesotans have all the information and access to resources they need going forward.”