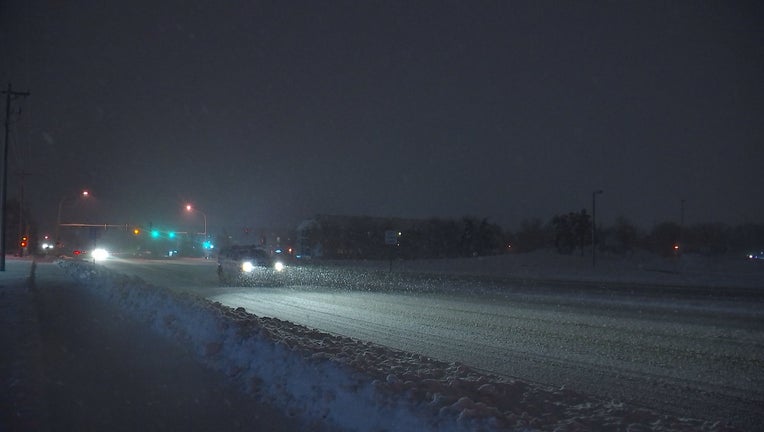 Drivers are facing snowy roads across Minnesota on Saturday.

(FOX 9) - Snow followed rain and sleet on Saturday in the Twin Cities, making for difficult travel in the evening hours.

And snow is expected to continue overnight into Sunday afternoon in the metro. North of the metro, a Winter Storm Watch is in effect with a blizzard warning in effect for Duluth, Minnesota.

Snow followed rain and sleet on Saturday in the Twin Cities, making for difficult travel in the evening hours.

Statewide, Minnesota State Patrol said there were 317 crashes reported between 10 p.m. Friday and 9:30 p.m. Saturday. Of those crashes, there were 29 with injuries, including a serious crash in Coon Rapids.

The kind of weather you saw Saturday depended on where you were and what time of day it was. and the changing conditions led to some challenges on the roads.

"I was taking a small curve in a road, going about 15 miles per hour, and the car just started to slide," said driver Doug Sawyer.

Rain and sleet turned to snow, and back to sleet and then to rain. After a few cycles of that, roads got slick in some spots.

"I turned into the slide and it kept going and eventually spun me all the way around and I turned around in a driveway and came here and I’ll go home slower it’s what we have to do in Minnesota," said Sawyer.

MnDOT plows have been cruising around the state, trying to keep roads clear. and while they spent the majority of their day further north and northwest of the cities, there were slippery roads in the metro too.

"Even in this weather, people may think it's clear but it's not," said Minnesota State Patrol Lt. Gordon Shank. "There are still icy spots. It’s still slick so make sure you're not going too fast. The roads may look clear but they’re not. Don’t risk it."

And it's not just ourselves and other drivers we need to be on the lookout for.

"We did have a trooper hit last night," explained Lt. Shank. "So make sure you’re moving over for our emergency lights. We want to help people but we can only do that if people give us the time and space to do so."