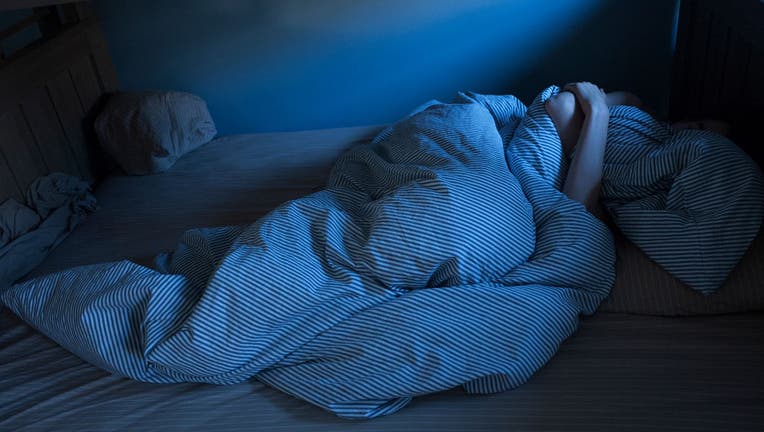 FILE - A teenage boy sleeps through most of the late morning on Jan. 13, 2018, in his home in Brooklyn, New York. (Photo by Andrew Lichtenstein/ Corbis via Getty Images)

Getting quality sleep is important for a multitude of reasons, and growing research underscores its specific importance for heart health.

Heart disease is the leading cause of death in the United States. In June, the American Heart Association added sleep duration to its checklist of factors for cardiovascular health.

The list, called "Life’s Essential 8," was updated from the previous "Life’s Simple 7" list first published in 2010. Sleep, as well as a healthy diet, participation in physical activity, avoidance of nicotine, healthy weight, and healthy levels of blood lipids, blood glucose, and blood pressure, round out the eight "essential" categories for optimal heart health.

This week, a team at Columbia University’s Mailman School of Public Health published a study about the recent change in the Journal of the American Heart Association.

The study consisted of about 2,000 middle-aged to older adults in an ongoing U.S. study of cardiovascular disease and related risk factors, called the Multi-Ethnic Study of Atherosclerosis (MESA). They participated in a detailed sleep exam by filling out sleep questionnaires, participating in an overnight sleep study, and wearing a device that measured their sleep for seven days.

The research team noted how sleeping seven hours or more — but less than nine hours each night — was considered indicative of ideal sleep health in the study. For adults, between seven and nine hours a night is recommended by the U.S. Centers for Disease Control and Prevention.

The study noted how sleep, alongside diet and physical activity, is one of the three pillars of health — yet poor sleep is "ubiquitous" among Americans. Overall, it found that 63% of participants slept less than seven hours per night and 30% slept less than six hours.

People who slept less than seven hours a night had a higher chance of having "low sleep efficiency," irregular sleep patterns, excessive daytime sleepiness, and sleep apnea. Roughly 47% of people in the study had moderate-to-severe sleep apnea, where breathing repeatedly stops and starts, while 14% reporting have excessive daytime sleepiness and 36% suffered from high insomnia symptoms.

Notably, short sleepers also had a higher prevalence of heart disease risk factors, such as being overweight/obese, having type 2 diabetes, and high blood pressure, the study authors wrote.

Short sleep, poor‐quality sleep, and insomnia have been linked to a higher caloric intake and unhealthy food choices, including a lower intake of plant‐based foods and higher intakes of added sugar and sodium, the authors noted. Meanwhile, poor sleep has also been linked to lower physical activity, depression, and stress — which can all impact heart health.

"Our results demonstrate that sleep is an integral component of (cardiovascular disease)," said Nour Makarem, Ph.D., assistant professor of epidemiology at Columbia Mailman School of Public Health and lead author of the study.

RELATED: He’s the shoe shiner who can put you to sleep with his voice and polish

"This study provides compelling evidence that sleep metrics are an important factor in cardiovascular health," said Dr. David Goff, director of the Division of Cardiovascular Sciences at the National Heart, Lung, and Blood Institute, who was not a part of the study team.

"Recognizing sleep as an integral part of heart health is a transformative step toward reducing the global burden of cardiovascular disease, the leading cause of death, and reducing health disparities associated with it," Goff continued.

How much sleep is needed for optimal heart health, by age group?

The American Heart Association’s sleep metric suggests seven to nine hours of sleep daily for optimal cardiovascular health for adults, and more for children depending on their age.

Ideal daily sleep ranges for children are between 10 and 16 hours per 24 hours for ages five and younger. Ages six to 12 are recommended to get between nine and 12 hours of sleep, while those between 13 and 18 are suggested to get eight to 10 hours.

What else contributes to healthy sleep?

The benefits of good sleep

Most adults need 7 or more hours of quality sleep each night, according to the National Institutes of Health. Kids and teens need even more.

In its updated "Life’s Essential 8" guidance, the American Heart Association noted how much of the existing research had focused on sleep duration but noted that sleep health is "multidimensional." Timing, regularity, efficiency, satisfaction, and impact on daytime alertness also play a role.

Keeping a consistent sleep schedule, including getting up at the same time every day, can help build good sleep habits, according to the American Academy of Sleep Medicine. Setting a bedtime that is early enough to get at least seven to right hours of sleep for adults is also key.

Other tips include keeping a comfortable and cool bedroom environment, limiting exposure to bright light and electronic devices at bedtime, and avoiding alcohol and caffeine before bedtime.

"Your daily routines – what you eat and drink, the medications you take, how you schedule your days and how you choose to spend your evenings – can significantly impact your quality of sleep," the AASM states on its website. "Even a few slight adjustments can, in some cases, mean the difference between sound sleep and a restless night."

RELATED: Most women can't spot signs of aggressive form of breast cancer — here's what to know