WASHINGTON - Following the violent pro-Trump riot inside the U.S. Capitol on Wednesday, Simon & Schuster announced it will no longer be moving forward with publishing Republican Sen. Josh Hawley’s book, "The Tyranny of Big Tech," citing Hawley’s "role in what became a dangerous threat to our democracy."

In a statement tweeted by the publishing company, Simon & Schuster said it works to help amplify a "variety of voices and viewpoints," but that the company could no longer "support Senator Hawley after his role in what became a dangerous threat to our democracy and freedom." 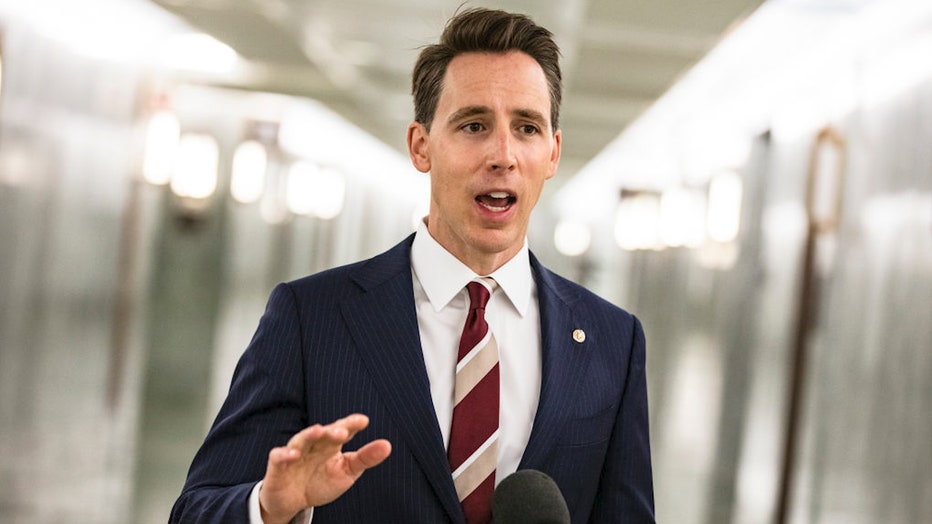 FILE - Senator Josh Hawley, R-Mo., makes a statement after voting in the Judiciary Committee to move the nomination of Judge Amy Coney Barrett to the Supreme Court out of committee and on to the Senate for a full vote on Oct. 22, 2020 in Washington,

Hawley, Sen. Ted Cruz, R-Texas, and several Republicans in the Democratic-majority House said in December they would object on Trump’s behalf during the Jan. 6 count of electoral votes.

Without giving specifics or evidence, Hawley said he would object because "some states, including notably Pennsylvania" did not follow their own election laws. Lawsuits challenging Biden’s victory in Pennsylvania were unsuccessful.

"At the very least, Congress should investigate allegations of voter fraud and adopt measures to secure the integrity of our elections," Hawley said in a statement. He also criticized the way Facebook and Twitter handled content related to the election, characterizing it, without evidence, as an effort to help Biden.

Trump had falsely claimed there was widespread fraud in the 2020 election. He pushed Republican senators to pursue his unfounded charges even though the Electoral College cemented Biden’s 306-232 victory and multiple legal efforts to challenge the results failed.

Even after the chaos that ensued at the Capitol, Hawley stated he would move forward with his objection to the certified Electoral College votes from Pennsylvania, teeing up hours of debate in the House and Senate.

The Missouri senator said he did not support violence but said the Senate should go forward with a legal process that includes his objections.

Hawley said his objections should be debated "peacefully, without violence, without attacks, without bullets." He said he hoped lawmakers would not brush his concerns aside because of the violence earlier Wednesday, including the death of a protester inside the Capitol.

RELATED: FBI seeking information after chaos and destruction at US Capitol

Cruz, who spearheaded the charge alongside Hawley to object to electoral votes that went to Biden, also defended his objection to the Electoral College results as "the right thing to do."

The Texas senator condemned the violence that erupted as the pro-Trump mob stormed the Capitol in an extraordinary attack over the election outcome.

Cruz led the first challenge to Joe Biden’s defeat of President Donald Trump by objecting to Arizona’s results. He sought to have Congress launch a commission to investigate the election. His effort was roundly defeated in the House and Senate.

Cruz said he was confident the country will have a "peaceful and orderly transition of power." Biden is set to be inaugurated Jan. 20.

Following President-elect Joe Biden’s official certification from Congress as the next president, calls for both Cruz’s and Hawley’s resignations from several Democratic senators and House members circulated on social media.

After Simon & Schuster announced its decision on his book Thursday, Hawley tweeted a response, saying the publisher’s decision to cut ties with him was "Orwellian."

Hawley claimed that the canceled contract is a violation of his First Amendment rights and stated he would be taking the company to court.