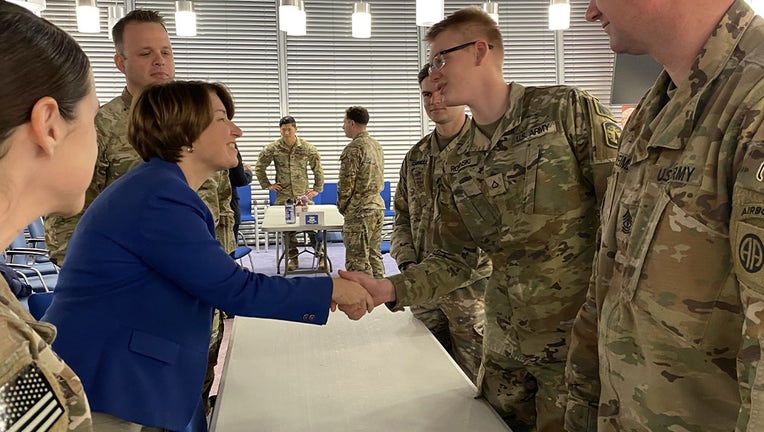 Sen. Amy Klobuchar greets US troops in Poland after Russia struck a Ukrainian military base near the border.  (Courtesy of Sen. Klobuchar's office.  / FOX 9)

(FOX 9) - Senator Amy Klobuchar visited with U.S. troops in Poland this weekend, as Russia launched an offensive just miles away, destroying a military base in western Ukraine.

Senator Klobuchar is part of a bipartisan group of lawmakers visiting Poland this weekend to meet with troops and witness efforts to help refugees from Ukraine displaced by the war with Russia.

According to reports, at least 35 people are dead following the strikes on Sunday in the city of Lviv, just 15 miles east of the Polish border.

"I was actually standing 15 miles from that missile strike," said Klobuchar. "We were at that border crossing and just a few hours after the missile strike occurred, the border guard said they could feel the ground shake."

Klobuchar says the attacks near the border of Poland, a NATO nation, are alarming.

"I will say those attacks so close to the Polish border, does beg the question here of how close [Putin's] going to get," said the senator. "Because if he attacks NATO nations, like Poland, that is going to immediately trigger NATO involvement."

As for refugee efforts, Senator Klobuchar says she's been impressed with how warmly the Polish people have taken in fleeing Ukrainian.

"They're taking in over 1.5 million refugees," she explained. "None of them are in permanent refugee centers. They've been taken into individual Polish families' homes, and they are there greeting them, gearing them if they have family that they're going to see or bringing them in. The population of Warsaw in just a few weeks has increased by 11 percent. So the big-hearted country, a country that in the past has been invaded by the Nazis, by the Prussians, by the Russians, and this time this country is standing up and standing for the democracy next door that is Ukraine."