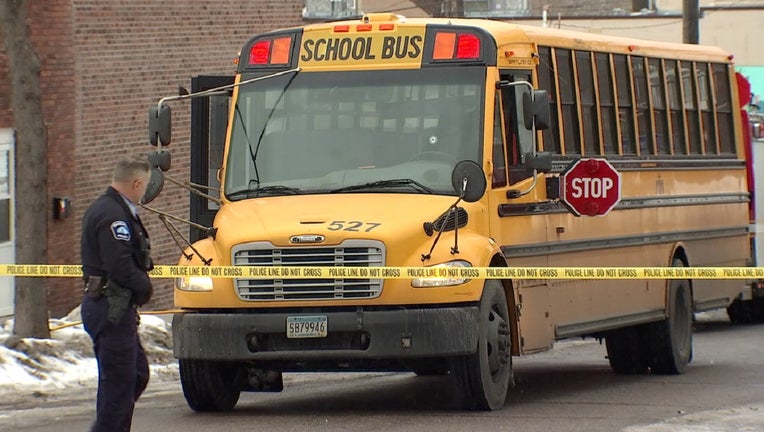 A bus driver suffered injuries on Wednesday after being shot in Minneapolis. (FOX 9)

MINNEAPOLIS (FOX 9) - A search warrant filed on Monday in the shooting of a Minneapolis bus driver indicates that the driver was hit by a stray bullet.

The driver was shot last Wednesday afternoon, as he finished up his route in the area of Girard Avenue and 37th Avenue. According to a search warrant filed on Monday, the bus driver told officers he was shot after he stopped behind two vehicles parked in the street along 37th Avenue and there was an exchange of gunfire.

The search warrant states, using witness interviews and video evidence, officers were able to track down a man involved in the shooting, who spoke with officers.

According to the warrant, the man told investigators he was driving a Chevy Impala when a person in a black Dodge Challenger pulled up to him and pulled out a gun. The Impala driver, who was in his vehicle with his son at the time, had to curb his vehicle and ultimately got out. According to the warrant, the Impala driver told police ultimately both men got out of their vehicles and shots were fired.

A school bus driver was rushed to the hospital on Wednesday after being shot in the head in Minneapolis. Police responded around 2:15 p.m. for the report of a shooting along 37th Avenue and Girard Avenue North. At the scene, police say the driver had been shot in the head.

At some point during the exchange of gunfire, police say the bus driver was struck by a bullet. It's unclear which bullet hit the driver. However, the man who spoke with the officers said he was remorseful for the incident.

At the scene last week, the bus involved had a clear bullet hole in the front windshield. Police say the driver was struck in the face by the bullet, but expected to survive. Three young kids that were on the bus weren't harmed physically.

No charges have been filed in the case as of Monday. The search warrants filed on Monday are seeking to examine a gun, cell phone, DNA, and the Chevy Impala involved.

Anyone with information on the shooting is asked to call CrimeStoppers at 1-800-222-TIPS (8477) or online at www.CrimeStoppersMN.org. Police say tips can be submitted anonymously.