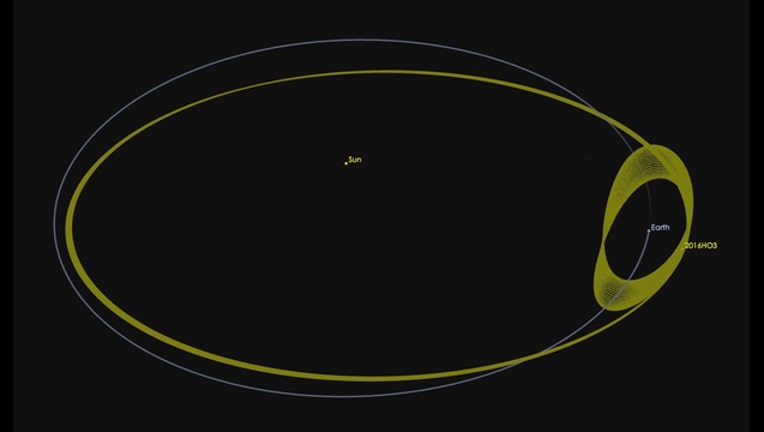 KMSP - NASA’s Center for Near-Earth Object Studies at the Jet Propulsion Lab in Pasadena, California has discovered that Earth has a second moon… of sorts.  The asteroid called 2016 HO3 was found and named last April, but NASA scientists have finally calculated its course and trajectory and discovered something unusual; it actually orbits the Earth, but not exactly like the Moon.

The moon is in a fairly stationary orbit, meaning it strays very little on its overall path around the Earth.  Not to mention, it’s basically planet sized.  But the newly discovered asteroid is roughly between 150 and 300 feet wide (hardly planet sized) and has a far more obscure orbit.  As the chunk of rock circles the sun, it loops around the Earth as well, zooming ahead of the planet half of the time and trailing behind the other half, NASA officials said. 2016 HO3's orbit is tilted slightly relative to that of Earth, so the asteroid also bobs up and down through our planet's orbital plane.

The path of 2016 HO3 also twists and drifts a bit over time, but Earth’s gravity keeps the asteroid from escaping entirely sending it into a messy orbit.  The object never comes closer than 9 million miles away and it never gets more than 24 million miles away.

Even though the orbit is fairly erratic and obscure, there is zero threat of this space rock ever hitting our wonderful planet.  That is the ultimate goal for the Near-Earth Object Studies group in California, is to find and track every object in space that could impact the Earth and cause us issues.  Unfortunately though, it’s a slow process as these scientists have estimated that they haven’t even found 10% of the potential Earth impacting objects in our Solar System since its inception some 20 years ago.  Technology advancements have helped in recent years, but they have a daunting task since our Solar System isn’t isolated and objects can come and go in and out of our area all the time.  Not to mention, if they bump into each other, directions can change drastically and alter the course of other objects.  It’s a task that will likely never be completed but the hope is that we can see a potential threat to humanity coming somewhere in the future and hopefully have the time and technology to avert disaster.