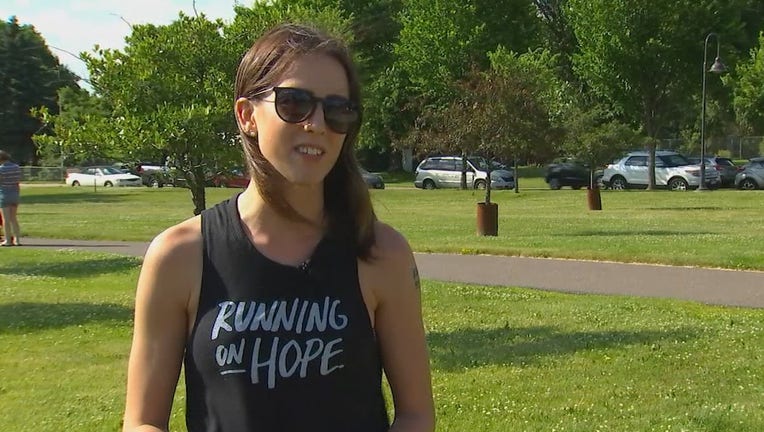 Abby Anderson speaks to FOX 9 in 2019 for an interview about her sister Gabriele "Gabe" Grunewald who passed away from cancer. (FOX 9)

FALCON HEIGHTS, Minn. (FOX 9) - The running community is mourning the loss of a woman fatally struck by a pickup truck in Falcon Heights over the weekend.

Abby Anderson, who once ran track and cross country for the University of Minnesota, died in the incident. Anderson was the sister of the late track star Gabriele "Gabe" Grunewald, whose battle with cancer inspired many.

The Minnesota running community is mourning the loss of a woman fatally struck by a pickup truck in Falcon Heights over the weekend.

"Complete shock and obviously just devastation, not only for this situation which is devastating in and of itself, but knowing how that builds on the situation with Gabe passing away almost exactly two years ago," said Sarah Hopkins, the Gophers’ cross country head coach and track and field assistant coach.

At the crash site in the 1700 block of North Cleveland Avenue in Falcon Heights, people have placed flowers in a growing memorial.

Authorities say a pickup truck hit a parked vehicle Saturday night and struck Anderson who was in a grassy area on the other side of the parked vehicle.

Anderson grew up in Perham, Minnesota. Coach Hopkins described Abby as hilarious, and says that she was most recently studying at the U of M to get her PhD. She says Anderson was also a nurse and played a big role in her late sister's foundation called Brave Like Gabe. Grunewald passed away in June of 2019.

"Gabe was diagnosed with cancer in 2009, and so It’s been this 12-year kind of grieving process and then to just add this to the equation is just - there’s no part of that that is fair to anyone involved," said Hopkins.

The Brave Like Gabe foundation released a statement this afternoon, saying in part, "On behalf of everyone at the foundation, we send our love and deepest sympathies to Abby’s family, her partner, and all those who love her. Words alone cannot capture Abby’s bright, joyful and generous spirit or the beautiful art she gave the world."

A GoFundMe can be found here.