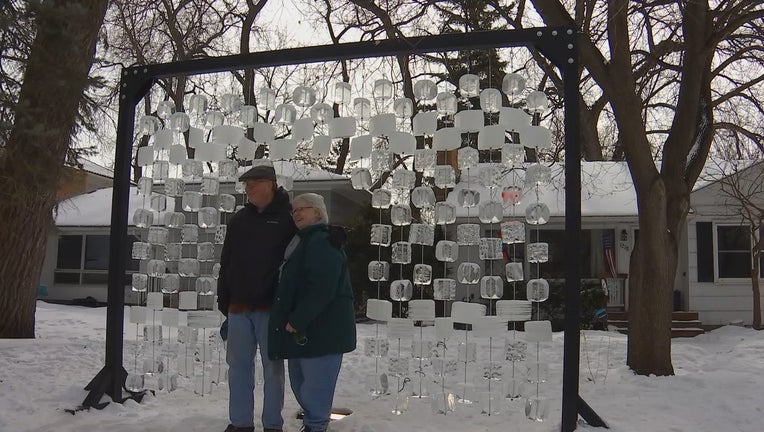 A couple poses in front of an ice sculpture in St. Paul. The sculpture was moved to a different area after the city took it down. (FOX 9)

ST. PAUL, Minn. (FOX 9) - On the 1200 block of Summit Avenue, a popular winter attraction has returned. Standing more than eight feet tall, the "Ice Curtain" is the third installment in a series of ice sculptures.

The artist, who wishes to remain anonymous, placed the sculpture in two different locations in St. Paul earlier this month. But, because he didn't have a permit, the city ordered that the sculpture be removed.

An ice sculpture that was removed by the city is now back in the front yard of a St. Paul home.

So, local resident Andrea Yoch found a way to put the sculpture in her front yard, stating that because it's now on private property, it can stay in place.

"He wanted it to be a gift to the city," she said. "It went up Friday night and it's been non-stop traffic since then."

"It’s been a rough spell as it has for the whole Twin Cities, so to have this pure beautiful thing appear out of nowhere has been so much fun," Yoch said. "It’s created buzz in the neighborhood, people are coming out and they are chatting with people again. It’s really been a huge psychological boost for all of us."

"I’m in awe of it, only because I really am fascinated by more organic type of art," said Lenette Bauer. "And the fact that it’s anonymous is even more so, that somebody doesn’t want credit for it, they just want to give…and I think it’s beautiful."