Summer was unseasonably hot in many areas of the country, with several cities breaking summer temperature records, and it doesn’t appear that the heat is going to let up anytime soon.

LOS ANGELES - Colorado is bracing for a drastic weather whiplash. Record-breaking heat will soon be replaced wintry cold temperatures, as a blast of strong winds and cold air move into sections of the state and other parts of the West.

September is typically the time of year when snow begins to develop in the Rocky Mountains, but the region is set to see an unusually early-season winter storm, just one day after some areas endured highs in the 100s.

The sharp change from summer to winter-like conditions will be one of the most noticeable weather shifts to those who live in Colorado. It’s courtesy of a major cold front that was heading toward the Front Range on Monday, the easternmost section of the Southern Rocky Mountains.

Rain and snow were expected within the next 24-48 hours on Monday, especially for higher terrain in Wyoming and Colorado.

Significant snow accumulations are expected in the Front Range Mountains and Foothills. The Denver metro area could see between 3-5 inches of snowfall. Accumulation in Denver is not expected due to heat retained from previous hot days. 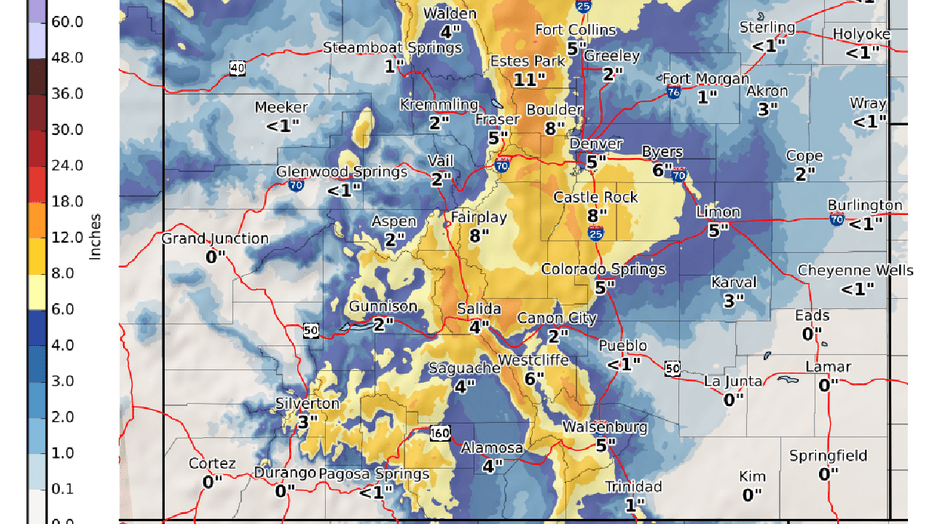 The system is also expected to produce gusty winds in excess of 40 mph. Downed trees, power outages, and slick roads are major threats with this system.

The weather whiplash will develop on the heels of record and near-record hot days across the West.

On Saturday, Denver reached a daytime high temperature of 100 degrees, breaking the high-temperature record for Sept. 5. The high heat will continue through the holiday weekend and Labor Day.

“Monday will bring another day of temperatures in the 90s, which will tie the record for most recorded 90 degree days in a year at 73 days,” Fox 31 Denver reported.

RELATED: Warm autumn ahead: Scientists predict above-average temperatures this fall across entire US

Red Flag Warnings were in effect for sections of Colorado Monday morning, as fires continued to spread across much of the West. Hot conditions, gusty winds, and low humidity levels are not a helpful combination for battling wildfires, but the precipitation and cool temperatures on the way should provide some mitigation.

The heat is not going to stick around. In fact, temperatures are going to plummet.

Tuesday, daytime highs in Denver are only expected to reach the 30s to 40s. Tuesday night, temperatures in Colorado will deep to the teens to 30s.

Winter Weather Advisories and Winter Storm Warnings are also in effect for sections of Wyoming, Utah and Colorado.