At least nine people have been killed after nearly 16 inches of rain led to historic flooding in Seoul, South Korea, on Monday, and forecasters warn an additional 10 inches could fall by the end of the week.

The Korea Herald reports that hundreds of people have lost their homes in the flooding, and hundreds more have been forced to evacuate and seek higher ground after rivers and streams overflowed their banks, pouring water onto local streets and highways in the city.

At least nine people have died, and six were reported missing in the Seoul area on Tuesday, August 9, after record overnight rainfall flooded South Korean homes, roads, and the Seoul metro system, according to local news reports. (Credit: @dreaming_woorim via Storyful)

An emergency meeting was held Monday with South Korean Prime Minister Han Deok-soo to get more information on the unfolding situation and to mitigate other injuries and deaths as a result of the historic rainfall, according to a press release.

South Korean President Seok-Yeol Yoon said it was "regrettable" that human lives have been lost and instructed local governments and other organizations to continue emergency work systems to do what they can to prevent more loss of life, the press release said.

And because of the flooding in the Seoul area, access to low-lying areas like underpasses, riverbanks and other flood-prone regions will be restricted until further notice.

A subway station in Seoul, South Korea, had to be closed after becoming inundated with floodwater on August 8. (Credit: @i_melody_you via Storyful)

The Korea Meteorological Administration said on Facebook that heavy rain will continue in the central regions of the country, as well as the northern Gyeonbuk region, until at least Friday.

Rain should end in the Jeolla region and outside Gyeongsang areas on Wednesday, according to the Korea Meteorological Administration.

In addition, the Korea Meteorological Administration said the rain is very slow-moving, and rainfall rates between nearly 2 to 4 inches per hour are expected.

At least nine people have died, and six were reported missing in the Seoul area on Tuesday, August 9, after record overnight rainfall flooded parts of South Korea, according to local news reports. (Credit: @AdrunnerLfg via Storyful)

Data coming in from the recent torrential rain has been quite impressive as well.

Monday's rain was the highest total seen in the region since 1920 when 13.96 inches of rainfall was reported. 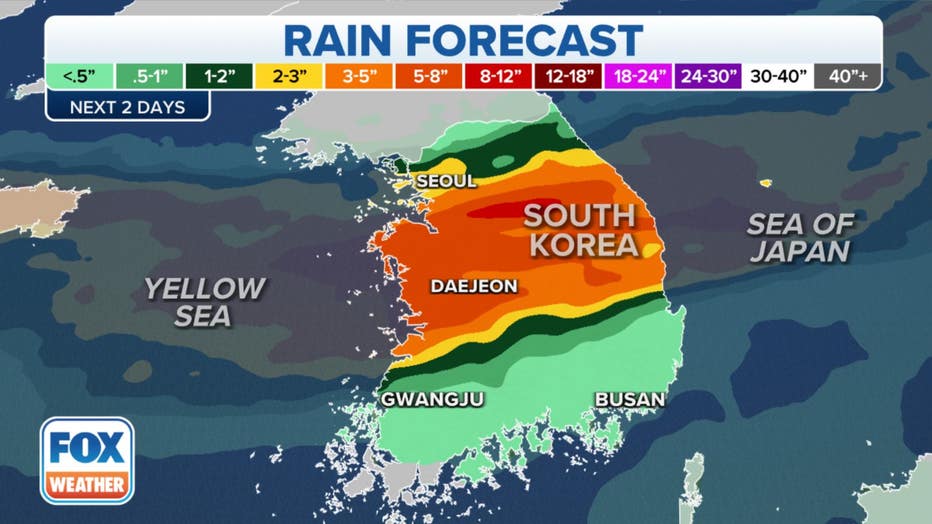 The rain forecast in South Korea over the next two days. (FOX Weather)

The Korea Herald reports that the Korea Meteorological Administration is warning people to prepare for additional damage and destruction from the additional rainfall and likely flooding in the Seoul area, and urges people to pay attention to local reports and follow guidance from local officials.

One of the hardest-hit areas of Seoul was Gangnam, which is the capital city's more affluent residential area, according to the Korea Herald.

Before Seoul became the bustling metropolis it is today, the region was a desolate, muddy flatland home to only a few scattered villages. 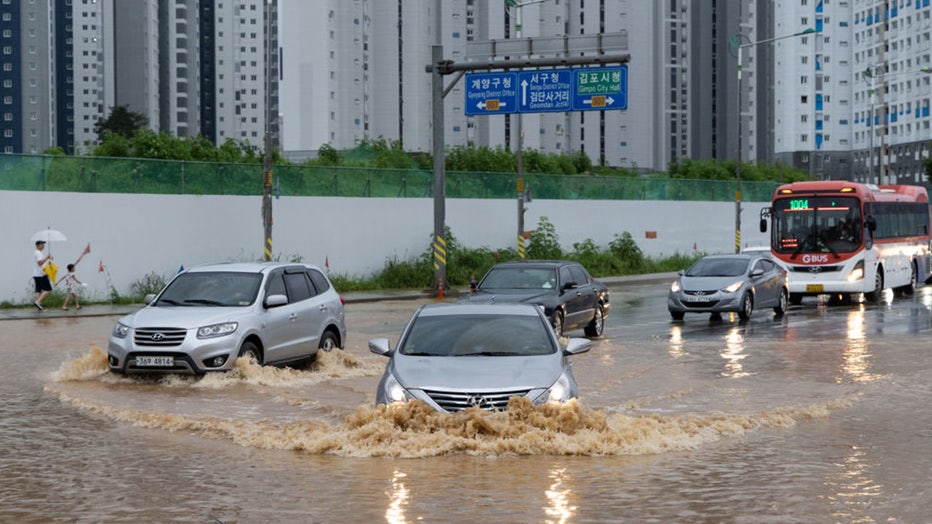 Today, the region has been developed, and nearly 10 million people call Seoul home. But its geography remains the same – low-lying and prone to flooding.

Read more on FOX Weather. Storyful contributed to this report.