Jurors began the day by sending the judge a note asking for transcripts of testimony by two former Kelly employees and for a legal clarification. Deliberations first began on Friday at federal court in Brooklyn before the panel of seven men and five women took the weekend off

Kelly, 54, had repeatedly denied the accusations that he preyed on women and girls during his 30-year Grammy-winning career.

Kelly's lawyers portrayed the accusers as groupies who wanted to take advantage of his fame. But the jury didn't buy that.

During the trial, several accusers took the witness stand and testified that Kelly physically, sexually, and psychologically dominated them. They said he sexually assaulted them, made them call him "Daddy," told them how they could dress, restricted whom they could speak with, and controlled when they could use the bathroom.

Prosecutors said Kelly used an entourage of loyalists — managers, bodyguards, personal aides, and drivers — to do his bidding and recruit victims.

A racketeering conviction carries a sentence of up to 20 years in prison. 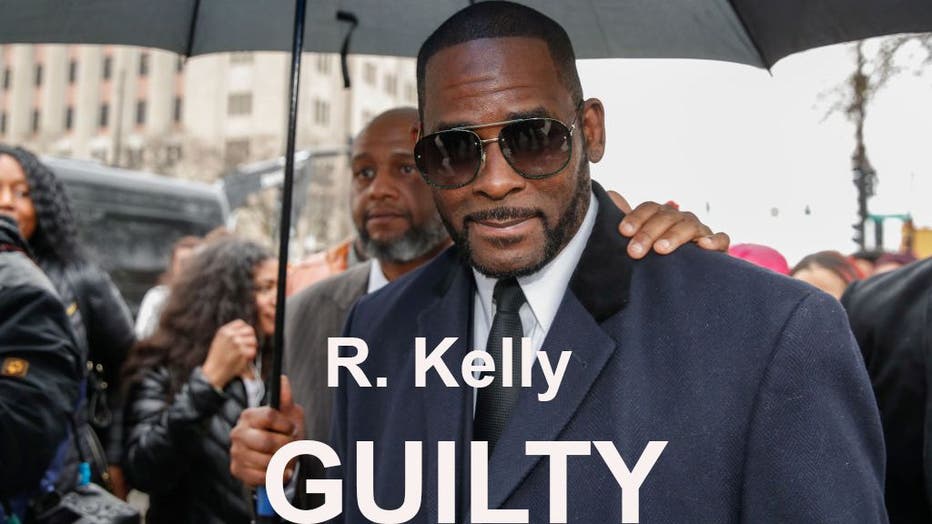 BACKGROUND: Kelly, Charges, and the Trial

What is R. Kelly known for?

You've probably heard "I Believe I Can Fly" at an inspirational moment or "Ignition (Remix)" at a college party. That's R. Kelly. The 54-year-old is an R&B superstar whose heyday was in the '90s and early 2000s when he racked up a slew of awards, including multiple Grammys.

Where is R. Kelly charged?

New York, Illinois, and Minnesota, all sex-related cases. The New York trial unfolded in a federal court in Downtown Brooklyn. He had pleaded not guilty to all charges.

What was this specific trial about?

This is a racketeering case. Prosecutors say R. Kelly physically, sexually, and psychologically dominated children — girls and boys — and women, often recording sex acts with minors, and using a cadre of loyalists to do his bidding and recruit victims. Kelly's lawyers have pushed back, calling the accusers groupies who "were dying to be with him."

The top count of racketeering carries a sentence of up to 20 years in prison if convicted. He also faces charges under the Mann Act.

What is the Mann Act?

The Mann Act is a 1910 law that forbids transporting "any woman or girl" over state lines for "immoral" acts.

How long has R. Kelly been in jail?

He's been held since July 2019, when federal indictments were announced in Chicago and New York. But he's only been in New York since June. His lawyer says he has gained a lot of weight and has run out of money while in jail.

Who was on the jury?

Seven men, five women. We don't know who the jurors are — the judge ordered their names and other details that could identify them withheld.

Was there anything unusual about the trial?

The judge barred reporters and the public from the courtroom and had to watch a video feed of the witnesses from an overflow room, where no phones or computers were allowed. The judge cited coronavirus concerns in decreeing the viewing accommodations but other recent trials in New York have permitted access to the courtroom.

What other legal problems has R. Kelly had?

He was acquitted in a 2008 child pornography case in Chicago. He's also been embroiled in many lawsuits.

With The Associated Press. This developing story will be updated.