ST. PAUL, Minn. (FOX 9) - Protesters taking part in a rally at the Minnesota State Capitol took to the streets on Sunday as unrest continues in the wake of George Floyd's death.

After rallying at the capitol, which has been encircled by Minnesota National Guard soldiers keeping a security perimeter, marchers moved towards University Avenue and began moving down streets and eventually onto I-94.

Police say hundreds of marchers are moving onto the highway and are urging people to avoid the area.

Around 4:20 p.m., FOX 9 saw police along with armor vehicles move onto the highway towards the protesters. Police say they are escorting the marchers to make sure there are no injuries.

Around 5 p.m., the marchers began to exit the highway near Lexington Avenue. About 20 minutes later, police said the group had paused at University Avenue and Chatsworth Street.

At about the same time, MnDOT announced it was moving up the closure of major highways in the Twin Cities, including I-94.

During the rally, a man approached the group, yelling the Black Lives Matter group should be considered a terrorist organization.

At one point during the rally, a man approached the group, yelling that the Black Lives Matter group should be considered a "terrorist organization."

The man said fires and other destruction from the riots had encroached on his neighborhood, shouted at the group while some from the rally told him to stop and leave while blocking him for moving further towards the group. 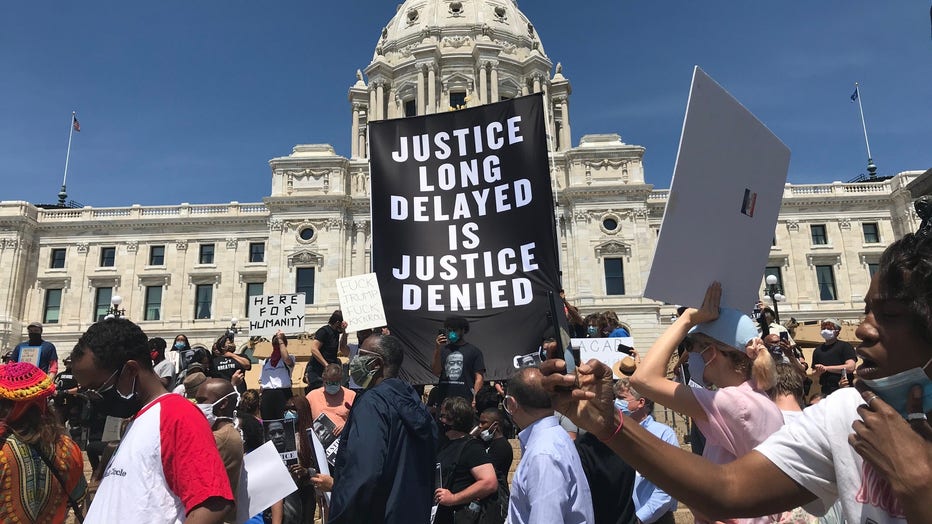 "You burnt down our whole neighborhood and expect to have a parade here," he yelled. "Now, I got to go to St. Louis Park."

Protesters eventually started chanting "Black Lives Matter" and forced the man away from the protests.

For the last few days, Minneapolis and St. Paul city administrations and Governor Walz have continually attempted to hide their own culpability for maintaining a system of impunity for racist violence by vilifying the justifiable rage of the community.

They blame “outside agitators” and “out of town racists” without ever acknowledging that we have plenty of homegrown racists who perpetuate the systems that have led to the people’s anger.

These same government officials decry property damage, calling it violence, without recognizing the long history of state sanctioned police violence that is orders of magnitude worse.  You can build a new structure or replace a broken window, but you cannot bring George Floyd, or the many others killed by law enforcement in this state, back to the living.

Thus, their narrative of bad vs. good protests is a false framing designed to focus attention away from the underlying condition that has led to the protests in the first place.

We recognize that our community has suffered great harm but the responsibility for that harm sits squarely on the shoulders of those who consistently fail to hold police accountable.

“We are sick of the steady drumbeat to ‘restore order.’  We do not need to ‘restore order.’ We need a new order,” stated Bruce Nestor with the National Lawyers Guild—MN Chapter.  “Today can be the dawn, or it can be a continuing nightmare. The choice is ours.”