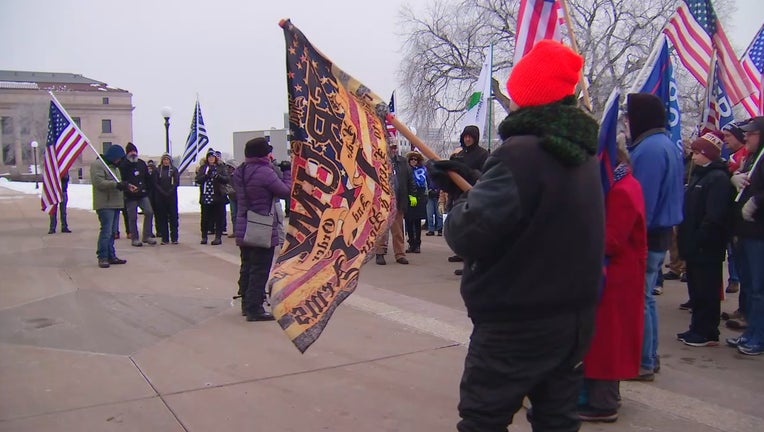 ST. PAUL, Minn. (FOX 9) - Just days after the violence in the nation’s capital, a group of protestors in the Twin Cities say they have no plans to give up their efforts to keep President Trump in office.

The group peacefully rallied Saturday afternoon outside the capitol building in St. Paul in support of the president.

Just days after the violence in the nation’s capital, a group of protestors in the Twin Cities say they have no plans to give up their efforts to keep President Trump in office.

"These events are very important to get together," one speaker said. "They’re cutting off all our communications. They’re getting rid of the president’s communication on all levels."

Five people, including a police officer, died after the riot on Wednesday at the U.S. Capitol that followed a rally by the president. Protesters marched into the capitol, disrupting a Senate vote to confirm the results of the election.

But while many were dismayed by the event this week, supporters in St. Paul on Saturday said the violence didn’t fully reflect the group at the capitol.

"I was in 30 to 50 steps within the stairs of the capitol and I’m telling you that 99 percent of the patrons were peaceful," said President Trump supporter Paul Bergley.

"We were with peaceful protesters praying at the bottom of the hill," added Sharon, who is also backing the president.

With the inauguration just days away, Trump supporters say they’re going to continue their fight to keep him in office.

"I’m willing to give up my life for my country," said Sharon. "I stand. I will not back down."

The Minnesota group says they are planning to continue these rallies at least until the inauguration of President-elect Joe Biden. For his part, President Trump said following Wednesday’s riots that he would prepare for an "orderly" transition of power to the Biden administration.

At the same time, the state has increased security around the Minnesota capitol building in light of the events in Washington, to ensure nothing like the events of Wednesday happen in St. Paul.