Record-breaking and potentially deadly heat is continuing to bake the central United States on Tuesday, with many areas seeing temperatures above 100 degrees once again. 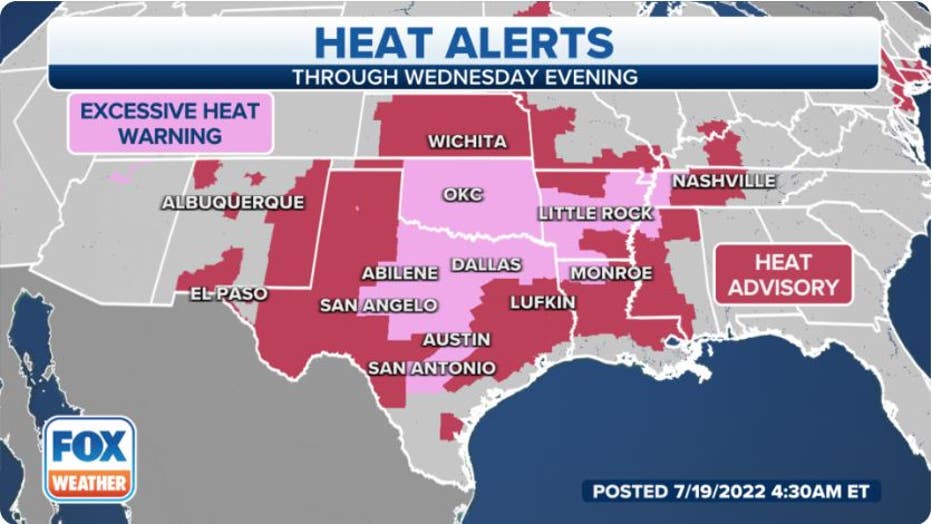 Excessive Heat Warnings and Heat Advisories are in effect.(FOX Weather)

Excessive Heat Warnings and Heat Advisories remain in effect for millions of Americans from the Plains and Southwest to the Gulf Coast.

Central and North Texas, as well as most of Oklahoma and Arkansas, are in the Excessive Heat Warning, which will remain in effect until Wednesday night.

The Heat Advisories are in effect across an area at stretches from southern and eastern New Mexico, Texas, Kansas and the Mississippi and Tennessee valleys.

People living and working in those areas must take precautions to prevent deadly heat-related illnesses, like heatstroke and heat exhaustion.

"Of course, this is that time of year when we really deal with our highest temperatures as we work our way through July into August, but this is extreme," FOX Weather meteorologist Britta Merwin said.

HOW THE WEATHER YOU'RE ACCUSTOMED TO AFFECTS NATIONAL WEATHER SERVICE HEAT WARNINGS, ADVISORIES 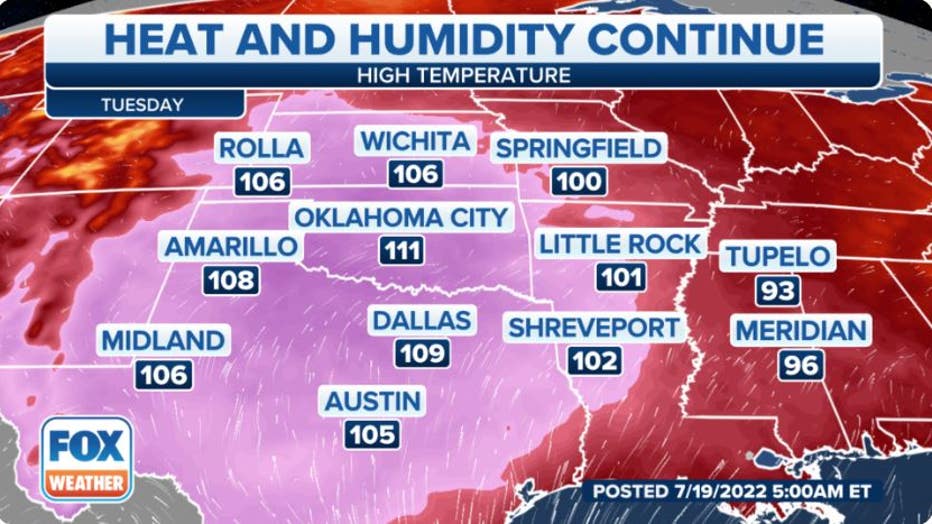 It's been absolutely blistering across most of the central United States for several days, and Tuesday will be no different.

High temperatures across the central and southern Plains will be higher than 100 degrees.

Dallas is expected to get close to 110 degrees on Tuesday afternoon, with other areas in Texas, like Austin, are seeing temperatures around 105 degrees or higher.

Amarillo will also be baking, with a high temperature on Tuesday reaching 108 degrees.

Those triple-digit temperatures also extend into the Mississippi Valley, with Shreveport, Louisiana, reaching a high temperature of 102 degrees.

Little Rock, Arkansas, will also be above 100 degrees with a high temperature of around 101 degrees.

WHAT IS THE 'FEELS-LIKE' TEMPERATURE? 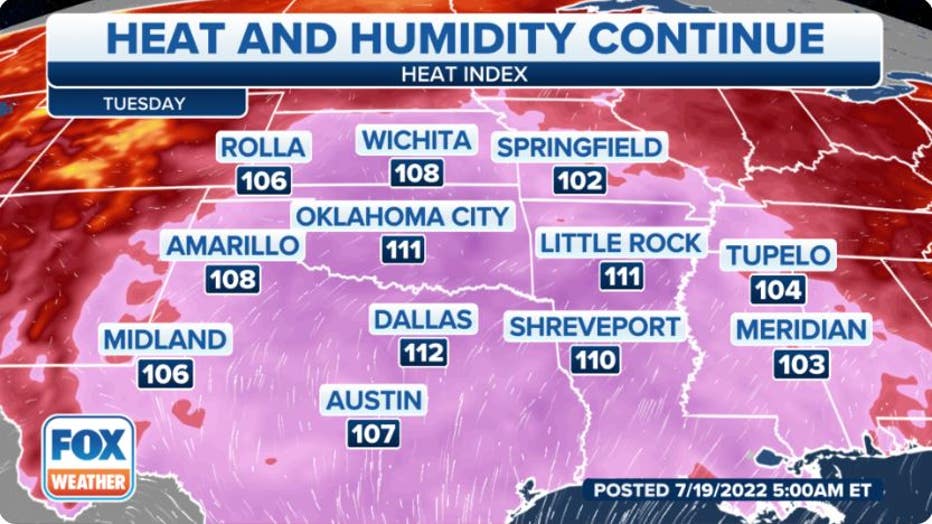 The humidity will make it feel much hotter across the central and southern United States.(FOX Weather)

And when you factor in the humidity, it will feel even hotter.

Widespread heat index values between 110-115 degrees are expected across Texas, the Plains and Mississippi Valley.

Oklahoma City and Little Rock will feel like it's 111 degrees, with Dallas coming in hotter at 112 degrees.

Austin, to the south, will feel like it's 107 degrees during the afternoon.

If you're in the areas where this excessive heat is taking place, be sure to drink plenty of fluids and try to limit time outdoors to avoid heat-related illnesses.

FIRESTARTER: LEAVING YOUR WATER BOTTLE IN THE SUNLIGHT CAN HAVE DISASTROUS RESULTS 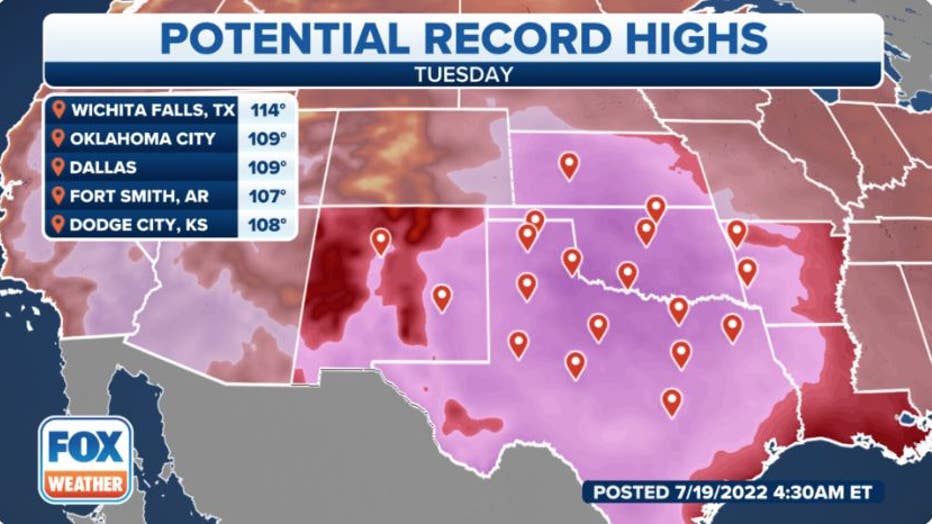 Several record high temperatures are in danger of falling on Tuesday.(FOX Weather)

"Again, this is more than just your typical summer heat," Merwin said. "These are new records that are being set across the area."

Wichita Falls, Texas, is expected to break its record with a high of 114 degrees on Tuesday afternoon.

Oklahoma City and Dallas are also expected to break their old records later in the afternoon.

Records could also fall in Kansas and Arkansas.

KEEPING YOUR FURRY FRIEND SAFE AND HEALTHY AS TEMPERATURES RISE 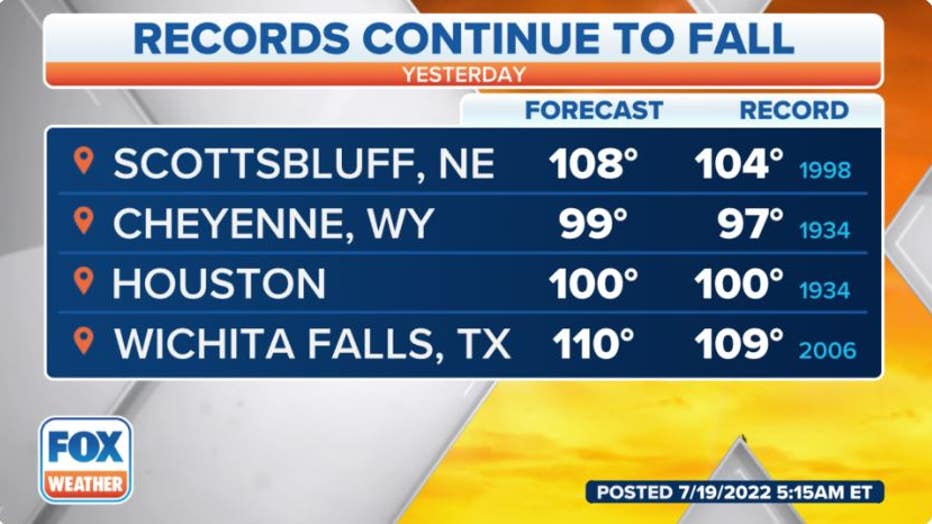 Tuesday's heat comes on the heels of several records already broken on Monday.

Wichita Falls broke its old record of 109 degrees by one degree.

To the north, Scottsbluff, Nebraska, broke its old record of 104 degrees set in 1998 by four degrees.

The best time to go outdoors during a hot summer day is in the early morning or late in the evening, when temperatures tend to be cooler than during the afternoon.

If you need to go outdoors during the heat of the day, experts advise you to wear loose, light-colored clothing and drink plenty of fluids.

CLICK HERE TO GET THE FOX WEATHER UPDATE PODCAST

The dangerous heat can make vehicles deadly for anyone left inside without air conditioning running. Make sure to "look before you lock" to ensure you have not left any children or pets unattended.