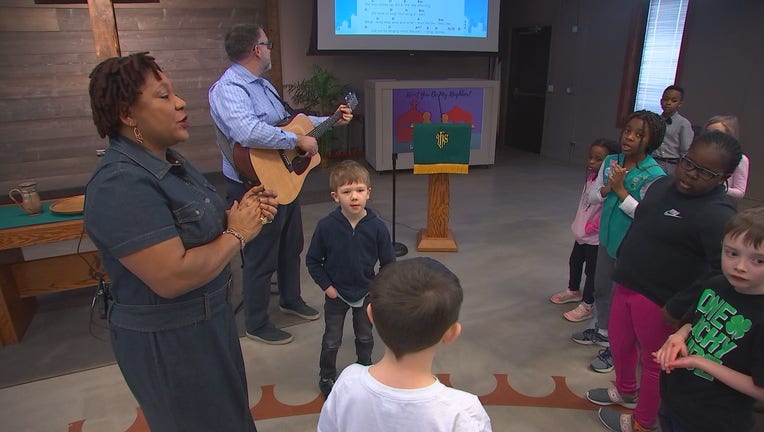 A deacon in Apple Valley facing deportation gets to stay with her children's choir after a judge temporarily awarded her an emergency stay, staving off deportation. (FOX 9)

APPLE VALLEY, Minn. (FOX 9) - A deacon at an Apple Valley church was facing deportation back to her native Cameroon, but hours before she was set to leave Minnesota, Gladys Mbonifor learned she had received an emergency stay from an immigration judge.

It came down after weeks of support from her church, congressional leaders and even strangers in the community.

A deacon for an Apple Valley church will be allowed to stay in America at least a little bit longer after being granted an emergency stay just hours before she was set to leave.

Mbonifor is happiest singing at her Apple Valley church as both deacon and director of the children’s choir.

Last month, she was almost deported back to her native Cameroon which is in the midst of a violent civil war for overstaying her temporary visitor status by several years and not filing for a renewal.

The mother fled to the United State years ago seeking a new life. In January, she was prepared to face the end of that life in Minnesota.

“After all the packing, I called them for a prayer,” she said. “We prayed, we sang and cried together. Then, they all left.”

With her flight booked for the next morning, she spent time with her daughter before saying goodbye, but then she received a phone call.

“At 2:35, I received a call from my attorney’s office saying, Gladys, I have some good news for you. I was like, oh my God, she says your stay has been approved,” Mbonifor said.

“The way I felt I caught my daughter, we almost fell on the ground. God is really at work,” she added.

Mbonifor credits the enormous support from her church family, congressional leaders and even strangers in the community who felt moved by her story.

Pastor Rob Smith, of the Spirit of Life Presbyterian Chruch hopes this is a reminder that when people work together good things can happen.

Gladys’s attorney said her stay is indefinite while they wait for a judge to make a decision on her asylum case. Her next hearing is in April.