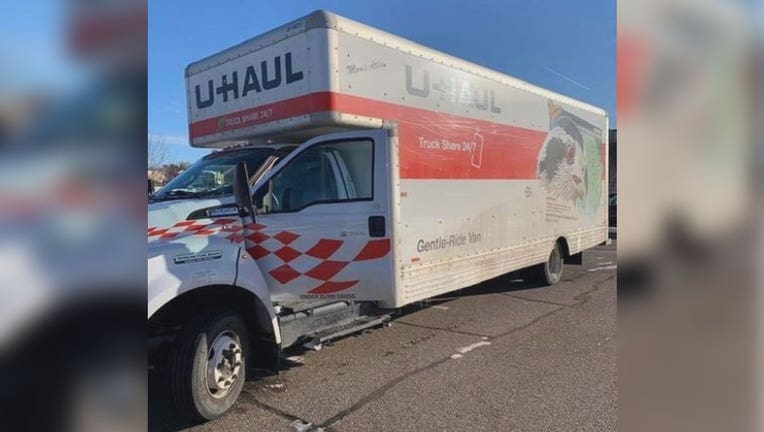 Police may have located some items from a loaded U-Haul stolen from a Minnesota family in the middle of a move. (FOX 9)

(FOX 9) - A family in the midst of a move who suffered a shock this week after someone stole their loaded U-Haul in West St. Paul received some good news on Tuesday.

The family learned Tuesday evening that, after receiving a tip from a citizen, they may have located some items from the U-Haul. According to police, someone who heard about the stolen U-Haul online reported seeing someone moving items from a U-Haul into a garage overnight. It's still early, but the police think the items are from the family's U-Haul.

A family in the midst of a move who suffered a shock this week after someone stole their loaded U-Haul in West St. Paul received some good news on Tuesday.

The West St. Paul family, who didn't want to be identified by their full name, is moving to Texas starting Wednesday.

This week, they rented a 26-foot box truck U-Haul and filled it with items from their home.

The truck was parked in front of their house, but when they got up Tuesday morning, it wasn't here. The theft left them shattered.

"Because it's stuff that's irreplaceable," said Lily, Jason's daughter. "No amount of money  in the world can replace that stuff for us."

Lily shared the story on their NextDoor app and someone responded with a Ring doorbell video showing the truck being towed away by a dark SUV around 11:42 p.m. on Monday, with a car traveling close behind.

One commenter saw a towed U-Haul truck at Emerson and Smith, another saw it at East Page and Woodbury. The family isn’t looking for donations, they just want help.

Tuesday, the family learned someone else saw it being unloaded at a home in St. Paul about three miles away. Again, police believe the belongings found in the garage belong to the family. The family says they've recognized a Christmas tree in the garage. But it's unclear how many items belonging to the family have been recovered.