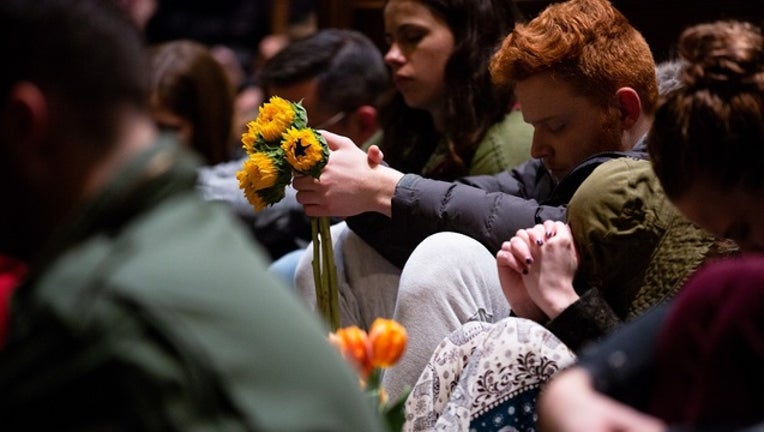 (Photo courtesy of The Office of Gov. Tom Wolf)

PITTSBURGH (AP) - The Pittsburgh synagogue that six months ago was the site of the deadliest attack on Jews in U.S. history held a vigil and offered its sympathy after another deadly shooting Saturday at a synagogue near San Diego, saying such violence "must end."

"It was only six months ago to the day that we became members of that tragic club of community-based shootings to which no one wants to belong," read the statement from Pittsburgh's Tree of Life synagogue.

"We know first-hand the fear, anguish and healing process such an atrocity causes, and our hearts are with the afflicted San Diego families and their congregation. We will not give in to H(asterisk)," the statement read.

"These senseless acts of violence and prejudice must end," it continued. "Enough is enough!"

Dozens of Pittsburgh residents gathered Saturday evening for a vigil of song and prayer on a corner outside the synagogue, joined by Mayor Bill Peduto and Rabbi Jeffrey Myers, who himself survived the October attack on Tree of Life.

Peduto tweeted a picture of the vigil, accompanied by text that read: "We gather. Again. Always. Until we drive hate speech & acts of hate out of our city, our state, our nation, our world."

Meanwhile, Pittsburgh's Public Safety Department said it was monitoring the situation and would increase security as necessary. It urged members of the public to remain vigilant and alert emergency officials if they saw anything suspicious.

"We understand this heartache all too well," Public Safety Director Wendell Hissrich said in a news release. "Our thoughts are with those in the San Diego area, and our actions locally are and will continue to be focused on keeping everyone safe."

Authorities say John Earnest, 19, opened fire inside the Chabad of Poway synagogue Saturday as worshippers celebrated the last day of Passover, killing a woman and wounding the rabbi and two other people.

A person identifying himself as John Earnest posted an anti-Jewish screed online about an hour before the attack and cited the suspects accused of carrying out deadly attacks on mosques in New Zealand last month and at Tree of Life.

Eleven people died and seven were wounded in the shooting at Tree of Life on Oct. 27. Truck driver Robert Bowers, 46, of Baldwin, Pennsylvania, pleaded not guilty to carrying out the attack, during which authorities say he expressed hatred of Jews.