North Minneapolis riverfront project: If you build it, will Beyonce come?

MINNEAPOLIS (FOX 9) - Everyone involved with planning the Upper Harbor Terminal development in North Minneapolis agrees the project will be important for generations to come, but there are major disagreements on what the final project should include.

The venture will take shape on 48 acres of post-industrial waste land, north of downtown Minneapolis, tucked between the Mississippi River and Interstate 94.

The project is in councilman Phillipe Cunningham’s ward.

“It is high stakes,” he said. “We can't put off this development or the opportunity is going to pass. We operate in a system that causes urgency, either you get it while it is hot or it passes you by.”

The general plan for the former shipping terminal is to transform it into 20 acres of park space and a 10-thousand seat concert amphitheater along with a possible business park, an entrepreneur incubator, plus market rate and affordable housing, retail, and a maybe even a hotel.

But the details on all that remain vague. 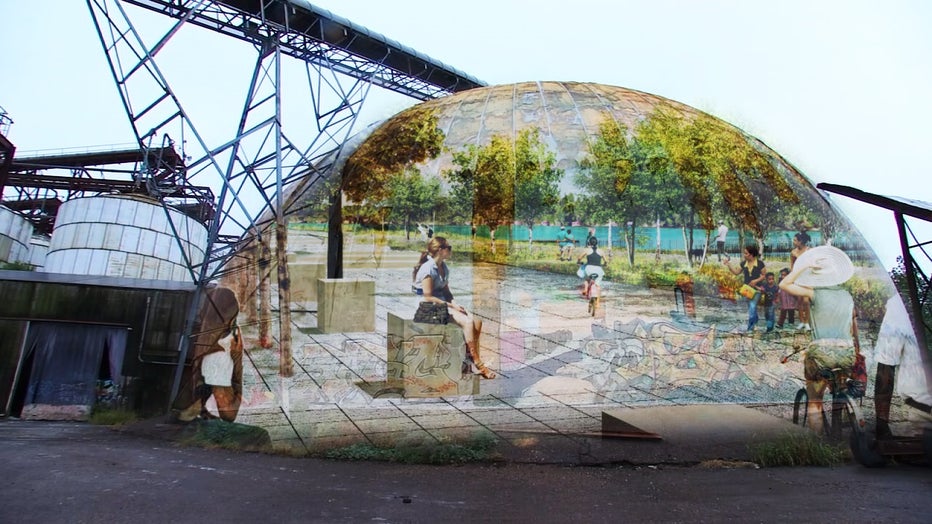 A look at the before and rendered after of the Upper Harbor Terminal redevelopment proposal on Minneapolis' north riverfront. (FOX 9)

When Cunningham was asked why an amphitheater is included he replied,  “When it comes down to it, we on the north side deserve to have nice things too."

But some community members question whether an amphitheater is what the North Side really needs, or if it’s just what developers want.

Colleen O’Connor-Toberman, with Friends of the Mississippi, believes the options are too limited and echoes concerns from the National Park Service that the amphitheater will be too big and look like a parking ramp.

“We know this site is one of the most catalytic land transformations that we are going to see on the river for decades to come,” said O’Connor-Toberman.  "It is really large, privately owned, and generates wealth for a private company.”

Exclusive development rights for the project have gone to United Properties, owned by the Pohlad family. The company declined comment for this story.

The 10-thousand seat amphitheater would be operated by First Avenue.

"It would fill a real niche within the Minneapolis concert area," said Dayna Frank, who runs First Avenue.

She told the FOX 9 Investigators she was convinced after a May 2015 Alabama Shakes concert along the river on Hall's Island.

“It was one of those moments like this is the best moment in the world. I have found it,” Frank said.

Frank promised the project will be integrated into the north side community, providing performance spaces for local artists.

When asked if careers would come out of the project for people in North Minneapolis she replied, “Absolutely, absolutely, some people see a ticket taker, I see a future talent buyer.  Some people see a runner and I see my future stage manager.  There’s endless job and management potential here.”

Mayor Jacob Frey is the project’s most enthusiastic cheerleader.

“I can’t wait until that first concert and Beyonce, or whoever, is playing with downtown as the backdrop,” he told Fox 9 in March when the city council passed the concept plan.

"With sun setting, river to the left, with downtown as a backdrop, and seeing the amazing talent we have to offer in our city,” Frey said.

Mayor Frey said he believes the project will revitalize the North Side, by connecting neighborhoods to the river.

When asked if United Properties will eventually own the development Frey responded, “As far as ownership model, we’ve looked at several ownership models including city ownership especially of the performing arts center.”

While the contracts were awarded before he became Mayor, Frey is familiar with the big players behind the project. The Pohlad family, Frank of First Avenue and executives with Thor Construction, an early partner before the company went bankrupt, all have together given more than $30,000 to his political campaigns.

"If the implication is that it influenced a tiny bit of the proposal, absolutely not,” Frey said.

Many of the details of the project, what exactly will be built and where, are being worked out by a Collaborative Planning Committee, but there is dissent in their ranks.

“People should question, ‘why is this getting done this way?’” said Alexis Pennie, chair of the Collaborative Planning Committee.

Last week two members resigned and said the process is ”no longer collaborative,” and community concerns are “labeled as obstructionist.”

“If we want to right this ship, we have to be intentional about it and putting our $20 million in subsidies into an amphitheater for First Avenue does not fit in that,” said Pennie.

Bill English is a long time executive and community leader, who is pushing for a business incubator and the kind of good paying jobs that can sustain families

“An amphitheater becomes a roll of the dice my friend, I know it and you know it. What I want the city to do is get that land ready for jobs," he said.  “I will commit to you to fight until hell freezes over.”

State lawmakers, who went on a tour of the site last week, have already provided $15 million in bonding for basic infrastructure on the site, which will be matched by the city ($9 million) and the Minneapolis Park Board ($6 million).

But there is still a gap of $12 million just to get the site ready to build on. The city hopes that money will come from land sales and tax increment financing.

Minneapolis leaders will be asking the legislature for another $20 million in February to build the amphitheater, which has a price tag of $49 million, the rest coming from private and philanthropic sources.

There are also concerns the project will accelerate gentrification on the North Side. The McKinley neighborhood, which borders the site, already has the fastest rising property values. Home sale prices in McKinley have gone up 91 percent since 2015.

“It’s not a scenario where we want North Side to get short end of the stick. They are deserving of excellence, and we think we can do that and prevent these displacements,” Frey said.

The FOX 9 Investigators asked Cunningham if the city was making the plans for the project as it goes along, he replied, “It is more like we are building a plane as we fly it."