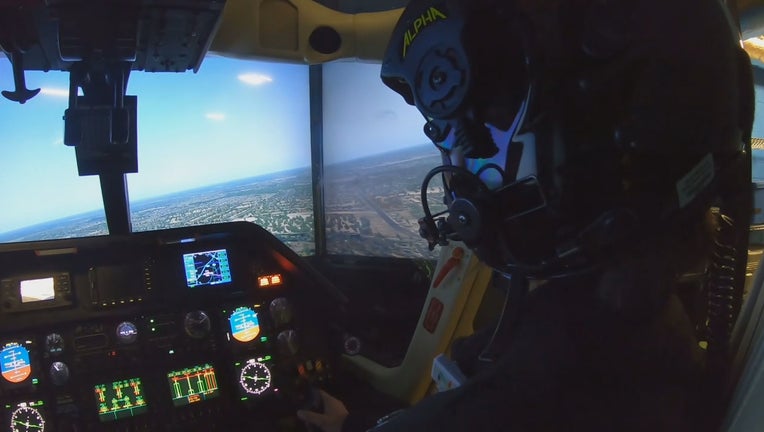 With air transports on the rise due to the pandemic and filled ICUs, North Memorial unveiled its state-of-the-art training flight simulator. (FOX 9)

ROBBINSDALE, Minn. (FOX 9) - North Memorial Hospital showed off its state-of-the-art flight simulator system Thursday, which allows crews to fly in an actual air ambulance while a computer creates real-life conditions for those at the controls.

The controls and instruments work exactly as they do in the aircraft. Pilots have to respond to daytime conditions, nighttime conditions, bird strikes, fires and many other potential scenarios while a computer creates real-life conditions for the pilots, the hospital says.

North Memorial Hospital showed off its state-of-the-art flight simulator system Thursday, which allows crews to fly in an actual air ambulance while a computer creates real-life conditions for those at the controls.

North Memorial has been using the technology for about a year, but it’s the first time showing it off to the public.

"Very positive," said Shimon Cohen, the hospital’s clinical services director. "It’s been very positive. It gives them an opportunity to practice in situations they normally couldn’t."

In addition to the flight simulator, North Memorial’s clinical care team created a full, hands-on training center in the bowels of its flagship hospital in Robbinsdale. In it is a ground ambulance and an intensive care emergency room where paramedic EMT flight teams can practice every stage of an emergency patient transport, particularly during this time of COVID-19.

"To put yourself in a simulation causes adrenaline to rise and then you get used to it," said Billie Sell, the North Memorial clinical manager. "You learn it. And it just makes it feel more real when you see it in real life. You’ve been there before."

Sell explained the one thing North Memorial has learned during the pandemic is when transporting sick COVID-19 patients between hospitals. It’s best to fly them in a prone position, on their stomachs, to help with breathing. So they’ve implemented protocols and safety enhancements in flight to make that happen.

"If you can get them prone earlier, they have less chance of them having to be intubated in their hospital stay," said Sell. "So we can take them from outside facilities in prone position, transfer them to a bigger facility and they tend to do better in the long run."

Sell and her team report a spike in air transport runs in recent months because of crowded hospitals and a shortage of ICU beds. So far, North Memorial reports flying more than 400 known or presumed positive COVID-19 patients across its seven Minnesota and Wisconsin bases this year.

"It’s kinda like a checkerboard, moving patients. Trying to make room in one area to another until they get through the healing process," said Cohen.