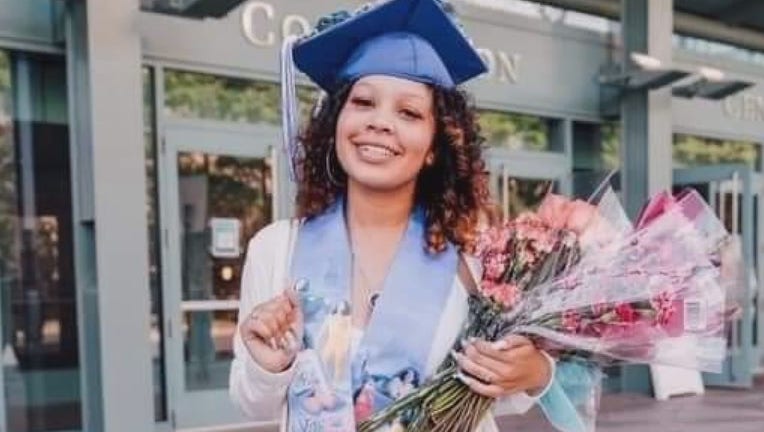 Mykia Carpenter, a recent North High School graduate, was shot in the neck during a mass shooting in south Minneapolis on Aug. 26, 2021. (Supplied)

MINNEAPOLIS (FOX 9) - A recent North High School graduate, who was among the seven injured in a shooting in south Minneapolis, remains hospitalized as family and friends cope with the shock and pain.

Mykia Carpenter was shot in the neck outside the Side Chick Restaurant early Thursday morning. Carpenter's former basketball coach says it was painful to learn she was an innocent victim of gun violence.

A recent North High School graduate, who was among the seven injured in a shooting in south Minneapolis, remains hospitalized as family and friends cope with the shock and pain.

"That was the other thing that really tugged at my heart as a mom myself: the unimaginable happening," said Crystal Flint, a high school basketball coach. "Your child goes to work and comes home, well doesn’t come home, and gets shot."

Carpenter has plans for college and eventually a career in nursing. She had been working a late-night shift at Side Chick Restaurant when she stepped outside and apparently found herself caught in a hail of gunfire.

"She was actually working," said Flint. "She was working. She wasn’t out having a good time. Not that you can’t have a good time, but she did everything we ask our children to do: go to school, be respectful, graduate, aspire to do more."

According to family and a GoFundMe site raising money for her medical care, Carpenter underwent hours of surgery at Hennepin County Medical Center where doctors inserted a tracheostomy tube to help with breathing. They wrote that it’s still unclear at this point if the young woman will ever talk again.

"She still has a long journey, not just physically, but the emotional toll, the mental toll," said Flint. "Can you imagine someone, not only sees it, but hears it, but felt it. My heart just goes out to her and the other six victims and their families. All have a long road to climb here."