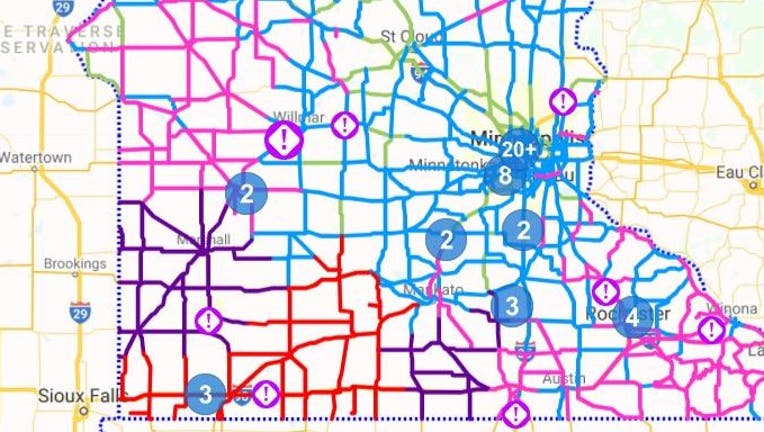 Roads outlined in red in the southwest portion of Minnesota are closed due to whiteout conditions. (511mn.org)

(FOX 9) - The Minnesota Department of Transportation is continuing to advise no travel on some highways in the southwestern part of the state due to whiteout snow conditions.

According to MnDOT, this impacts highways in Lincoln, Lyon, Murray, Pipestone, Redwood (south of Vesta and west of U.S. 71), and southwest Yellow Medicine Counties.

Officials expect the advisories to stay in effect until Friday morning. For the latest updates, travellers can check 511mn.org. Snow is expected to taper off later on Friday, but wind gusts could cause visibility issues.

From 8 a.m. Thursday to 6 a.m. Friday, there were 156 crashes (18 with injuries), 217 spinouts or vehicles that went off the road and 10 jackknifed semis statewide, according to Minnesota State Patrol. A crash near Glencoe included an ambulance.